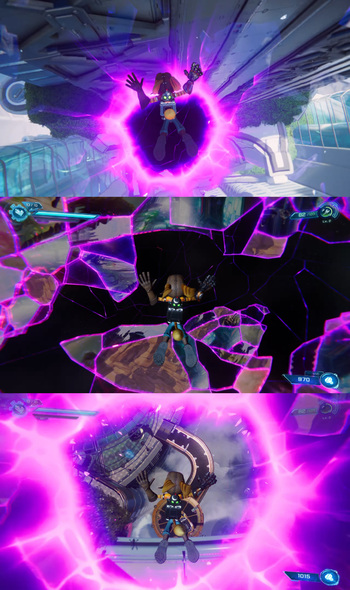 Now you're thinking with portals.
"But sometimes it happens that the shortest distance between two points is a crooked line... through the Twilight Zone."
— Rod Serling, closing narration to "In His Image", The Twilight Zone (1959)
Advertisement:

This is when a character briefly enters another dimension/world/plane as a means of covering distance in their home dimension.

There are three key elements:

This is usually done because travelling via the other dimension allows them to go a greater relative distance in less time, or avoid obstacles present in the home dimension. However, in many cases it is difficult or impossible to perceive the home dimension from the transit dimension, requiring skill, luck, support equipments, or experience to know exactly when and where they will re-emerge.

The ease and safety of this mode of travel varies, with many transit dimensions having their own dangers. Some types of dimensions are limited to spiritual travel, meaning they can only be used in this way by beings without an anchoring body.

In Science Fiction works, hyperspace often acts as this for Faster-Than-Light Travel. Where the transit dimension is a shadow plane or shadow reflection of the home dimension, this character is a Shadow Walker. If there are semi-permanent entrances to the transit dimension, may overlap with Portal Network or Portal Crossroad World. It is a common feature of a Layered World.

Characters may also use the Void Between the Worlds, rather than visiting a specific other dimension; however the same travel rules apply.

Compare Thinking Up Portals where a character bypasses the alternate dimension, creating a portal directly linking two locations in the same dimension. Also Our Wormholes Are Different, which can be either a gateway into another dimension, or a (piece of) alternate dimension in the form of a single-terminus tunnel, though not the original versionnote read: real-life theoretical construct which is a fold in three-dimensional space.

Cannonball is able to access "Cannon Space" when he rides really fast. He uses it to get to the second Duck Mart with Craig and Sparkle Cadet.

Cannonball is able to access "Cannon Space" when he rides really fast. He uses it to get to the second Duck Mart with Craig and Sparkle Cadet.