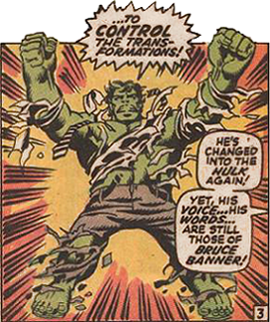 Shirt? Tatters. Shoes? Shreds.
Pants? Just turned into shorts is all.
"Thankfully, his clothes also grew just enough not to bother the censors."
— The Narrator, Arakawa Under the Bridge
Advertisement:

Heroes who can change their size or shape generally don't have to worry about ruining their clothes in the process. They must have Magic Pants.

Simply put, Magic Pants are the "civilian" clothing the characters wear as they go about their daily business. They may lose them during the Transformation Sequence, but once the dirty work is done, they'll appear back in them often right where they were standing. This can even happen if the transformations are shown to explicitly destroy the clothing.

To be fair, it's not like a character suddenly conjuring up several hundred pounds of mass out of thin air is made any more unbelievable by their clothes being exempt.

Note that in many cases, even if the rest of his clothing is destroyed, the hero's pants will miraculously survive. You can thank the Moral Guardians for that. This is also conceptually related to Out-of-Clothes Experience: Your clothes technically aren't a part of "you", so in spirit-space you're naked. Monster Modesty (a monster walks around almost naked for little reason) is often used in conjunction with this trope.

Also note that Magic Pants are only for characters who seem to remain clothed even when it's inconsistent with what gives them their powers. Magical characters (who presumably can conjure up a fresh set), characters with super speed (Superman, The Flash) who have the demonstrated ability to get dressed faster than the human eye can see, or heroes whose clothing is what makes them super in the first place would actually be aversions of this trope.

For transformations which ruin clothing in such a way as to show a titillating swath of skin while still keeping the naughty bits covered, see Clothing Damage.

See also My Suit Is Also Super — for a transformation-powered hero, a popular kind of super-suit is one that can transform with them.

...Because we can't exactly have a NAKED owl lady running around in a Disney cartoon, can we?

...Because we can't exactly have a NAKED owl lady running around in a Disney cartoon, can we?