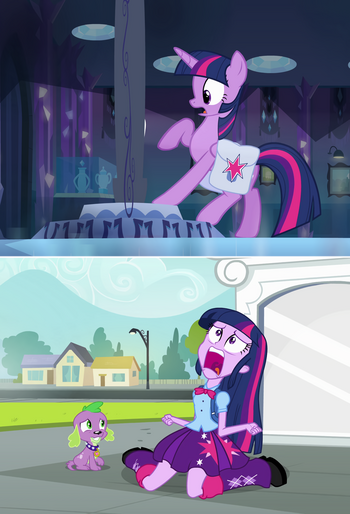 "Are you a dog?" "I think so, but I have no idea what you are!"
A non-human character in a series, often an animal, is turned into a human. The major difference between this and Pinocchio Syndrome is that the transformed character doesn't want to be human. Such changes are, more often than not, involuntarily forced upon them, like the inverse of a Baleful Polymorph.
Advertisement:

Sometimes, immediately after such transformation follows a Humans Through Alien Eyes sequence as the newly transformed inspects their new, strange foreleg extremities with five wriggling tentacles, the strange growth infecting the very top of their body and the bizarre inability to see in ultraviolet.

Once experiencing what it's like, the creature often can't wait to turn back to normal. The most common version of this trope will involve cats, due to the sly assumption that cats already think they're the best creatures, and also... well, you know. This can also be a Cool and Unusual Punishment for supernatural beings, as the loss of their powers forces them to be Brought Down to Normal. If the character is a nonhuman who hates the human race this may be a Karmic Transformation as they discover Being Human Sucks.

If the change is voluntary, the character only occasionally puts up with it for the sake of convenience. Very often, they are simply so bad at acting human that it's better for everyone that they aren't.

Sometimes the character flips between both, and has no specific problems with it, but does it selectively because it makes other characters feel more comfortable. This trope preferentially happens to the Non-Human Sidekick, where it can't be permanent because it might disrupt the premise of the character.

Naturally, the mascot-dominated demographics of Shōnen and shoujo will result in the transformation into a character who is incredibly adorable or attractive, providing eye candy for the audience while not invoking romantic notions in the established cast.

See also A Form You Are Comfortable With. Compare Become a Real Boy, in which attaining humanity is a central plot point, and Anthropomorphic Transformation, where the animal simply gains human-like traits without becoming fully human. Contrast Animorphism, which is kind of the opposite (humans turn into non-humans). May result in Alien Among Us or a Shapeshifting Lover. Contrast Humanity Is Infectious, where it's the human mindset that is catchy.

Van Helsing's Monsterfication Ray is able to transform monsters into humans, with Dracula and his friends subjected to this. Except for Blobby who gets turned into a small plate of green gelatin instead.

Alternative Title(s): Turning Into A Human

Van Helsing's Monsterfication Ray is able to transform monsters into humans, with Dracula and his friends subjected to this. Except for Blobby who gets turned into a small plate of green gelatin instead.