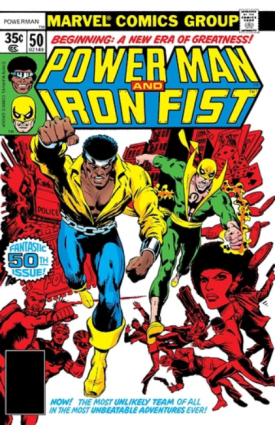 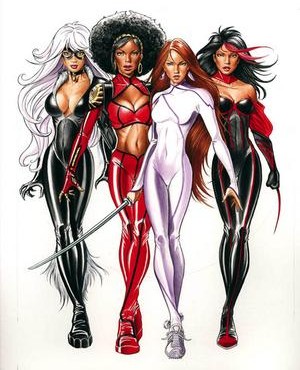 Heroes for Hire is a group of super heroes of Marvel Comics. It has been published in sporadic periods through the years. The main idea is that this Punch-Clock Hero group that perform hero type services sometimes outside of the normal heroes' areas of expertise. At times even the title itself is an Informed Attribute depending on the incarnation of the group and story arc, though money is always a factor.

First there was just Luke Cage, the original hero for hire, then he teamed up with Iron Fist, whose own title had been cancelled. Luke's series was retitled "Power Man & Iron Fist: Heroes for Hire", and the two became synonymous with the title of being Heroes for Hire. Supporting characters Misty Knight, a detective and sometimes girlfriend of Iron Fist, her partner Colleen Wing, martial arts expert would at times team up with the main two but not become official members until the 2006 series where Misty Knight officially takes over the organization. Throughout the various runs various other characters would team up/work for the organization on different missions.

The group at first was restricted to the pages of Power Man and Iron Fist but would only get its first book under the name Heroes for Hire in the 1990s when the Fantastic Four and the Avengers were presumed dead after the Onslaught event, it featured a rotating cast of characters and lasted for 19 issues. A third run, without Cage or Fist, but starring Misty & Colleen, took place between Civil War and World War Hulk, it came out in 2006 and lasted 15 issues. A fourth run debuted in 2010, officially lasted 12 issues although it had a one-shot Spider-Island tie in and a spin off mini series titled Villains for Hire that closed off that run.

Misty Knight made her live action debut in Luke Cage (2016), the third of five planned Netflix shows set within the Marvel Cinematic Universe, as played by Simone Missick. Likewise, Colleen Wing made her debut in Iron Fist (2017).

Heroes For Hire contains examples of: