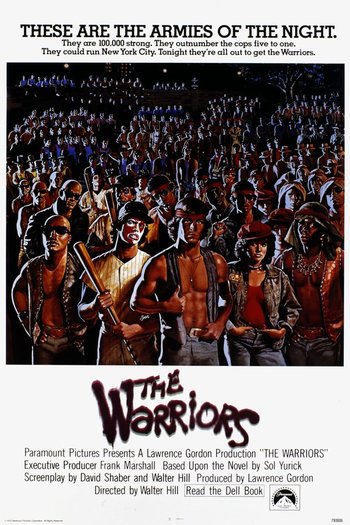 Can you dig it?
"There is such little glory in a poor man's life
He works for his money, and he takes a wife
But a poor man's son can be a hero in the night
With a fist full of anger, and the will to fight."
— Desmond Child, "Last of an Ancient Breed"
Advertisement:

The Warriors is a 1979 crime/action movie, directed by Walter Hill and based on the 1965 novel of the same name by Sol Yurick, that tells the story of nine members of a New York City street gang called "The Warriors" as they fight to survive one very bad night.

The movie starts with the Warriors arriving in a huge Bronx park to attend a summit called by Cyrus, the intelligent and charismatic leader of the Riffs, New York's most powerful street gang. Cyrus makes an ambitious proposal to the assembled delegates of the city's various gangs: if all of them unite under his leadership into an army, they can rule the city and take out the cops, the mob, and anyone else who gets in their way.

Swayed by his eloquence, almost all the gangs are completely fired up to unite and make Cyrus's dream a reality. They don't realize two things; the cops have been quietly surrounding the park as Cyrus speaks, and Luther, leader of the Rogues, is planning havoc. In the midst of his speech, as hundreds of gang members are distracted by their own frenzy, Luther shoots and kills Cyrus. Luther then frames Cleon, the leader of the Warriors, for Cyrus's murder. An instant later, the cops raid the park as the Riffs kill Cleon. None of the other Warriors know either that their leader is dead or that they are accused of Cyrus' murder, but they do manage to escape the frenzy.

The remaining Warriors are now faced with a nearly impossible task: They must make their way from literally one end of New York City (the Bronx) to the other (Coney Island), by subway, while being hunted by every other gang in the city, the cops, and the people who actually killed Cyrus.

The film and its source material are notable for being very loosely based on Xenophon's Anabasis.

Because the film was about street gangs, when it was shown in theatres, it often attracted members of actual street gangs. A number of theatres had extra security on hand after several riots broke out with rival gangs in some cities (most notably, Los Angeles) where it was shown. Ironically enough, there were no reported riots involving the film in New York City.

More than twenty-five years after the film's release, it was used as the basis for a video game that is generally considered a spectacular example of No Problem with Licensed Games.

A comic miniseries, The Warriors: Jailbreak, was published in 2009. Taking place after the events of the film, it deals with the gang breaking Ajax out of jail.

Tropers! Come out to Plaaaay!

"WHO are The Warriors?!? I want ALL the Warriors! Send the word!...."
Feedback