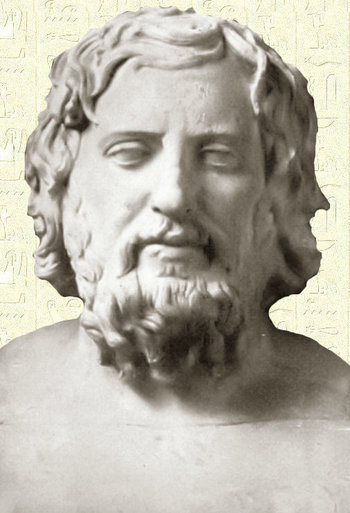 A Greek writer and historian, whose most famous writings cover events he experienced himself. He can be thought of as the first war correspondent. Most famous for the Anabasis, the trek of 10,000 Greek mercenaries from Mesopotamia through Armenia to the Black Sea. It has inspired quite a lot of fictional knockoffs, and has annoyed generations of students of Ancient Greek—Xenophon's clear, energetic style conspires with the fairly action-packed, exotic story to make for something relatively easy to teach as an Ancient Greek student's first taste of full-length classical literature (analogous to how Julius Caesar's Commentaries on the Gallic War are used in teaching Latin).
Advertisement:

That wasn't all he did, however. Xenophon was a student of Socrates (who makes an appearance at the beginning of the Anabasis), and is one of the better sources outside of Plato for information on his life and philosophy. Upon returning from his little trip to Persia, Xenophon, finding Socrates already tried, convicted, and executed, culled several people's notes (including Plato's) to write his own version of Socrates' Apology. He wrote several philosophical dialogues (much like Plato) expounding on Socratic philosophy, and portraying a Socrates rather different from the one we find in Plato: in one scene in the Memorabilia, he seems to indicate that Socrates was a pimp, and in another, he has him lobbing well-executed and imaginative insults towards Glaucon (whom philosophy students may remember as Plato's elder brother and one of Socrates' interlocutors in The Republic). He also wrote some short treatises (including at least one about hunting), a work on The Peloponnesian War called the Hellenica that picks up where Thucydides left off, and a rather fictionalized biography of Cyrus the Great (really intended more as a handbook on how to raise a just king).

For all that, his reputation has historically been that he was a second-rate writer and historian, and (besides the Anabasis) his works have consequently been ignored by academia, particularly since the 19th century. On the other hand, several figures—including Niccolò Machiavelli and John Adams—have regarded him rather more highly, and studied him seriously. The most recent of these is the German-born American Jewish philosopher Leo Strauss, and given Strauss' (controversial) influence in the philosophical and classical academy, Xenophon is currently undergoing something of a revival, with new translations of obscure works appearing after a long absence, with a particular focus on Xenophon's more practical approach to Socrates' teaching.

And his On Horsemanship is the first recorded work advocating sympathetic horsemanship, aka horse whispering. Make of that what you will.

Not to confuse with Xenophobe, Xenophanes, or Xenomorph.