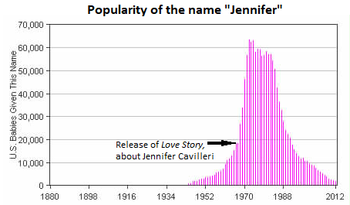 Pain: This might be a different Hercules!
Panic: Yeah! Hercules is a very popular name nowadays!
Pain: Remember like a few years ago, every other boy was named Jason and the girls were all named Brittany?
— Hercules
Advertisement:

If a work is extremely popular, then it often causes a fad where many babies are named after major characters from the work for about a year or two. In hindsight, it can be easy to tell when someone was born if their name was a popular fad name during that period. Usually, these fads die out quickly, however, some become so popular that they popularize an obscure name (or even a name originally intended for the opposite gender) to the point where the name stays popular long after the popularizing work becomes a distant memory. The bad side of this is that if a name loses popularity after the fad, then it can be awkward for the child later in life (such as if they're named after a fantasy character with an odd name).

Note, that names usually must follow the One Mario Limit (AKA, they're obscure or even invented names). If they're a common name then the work must have been the main cause of why it became (even more) popular all of a sudden.

To see how names have changed in popularity over the years in Britain, visit this page

from the Office for National Statistics, which has an interactive chart.

See Baby Name Trend Killer for when the opposite happens. Subtrope to The Red Stapler.