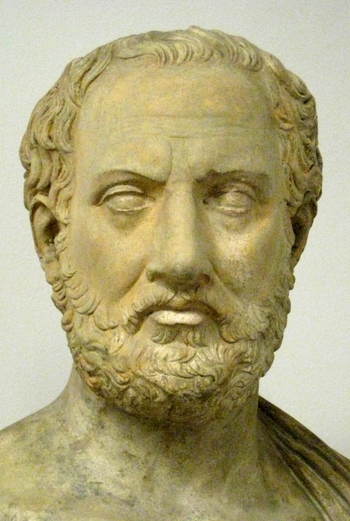 Right, as the world goes, is only in question between equals in power, while the strong do what they can and the weak suffer what they must.
Advertisement:

Thucydides was an ancient Greek historian. Unlike Herodotus, he was the first to use reasoning and logic exclusively, thus making him the first historian in a modern sense. He is famous for his work, The History of the Peloponnesian War which chronicles the multi-decade breakdown of the unity of Hellas into warring city-states locked in Civil War after their famous unity during the Greco-Persian Wars.

Now this narrative is complicated because of several factors. Firstly, the narrative is incomplete. Secondly, Thucydides was himself a participant in the conflict. He was a naval commander who led a failed mission and was dismissed and exiled for his post. This of course colours his own writings and impression of the Athenian City-State and its fractious relationships with its generals and zealous exercise of civilian control over the military. The third reason is the language. Thucydides wrote his work in a highly unorthodox-for-his-time Greek that even ancients found hard to read. Most translations for the sake of readability tend to transcribe and transliterate it to make sense, which often results in sentences losing ambiguity, multiple meanings, and articulating more definite and clearer views than the original text allows. The fourth reason is that Thucydides to illustrate his point and meaning often resorted to the form of dialogues which means that occasionally, as in the famous "Melian Dialogue" or "Pericles' Funeral Oration", characters voice views and opinions that are probably not literal transcriptions but symbolic and representative of actual interactions and meanings.

As such, Thucydides might be a lot more naturalistic and less fantastic than Herodotus, but his history-writing is no less a creative endeavour, and quite far from our ideas of "history".