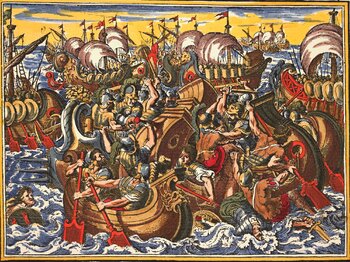 This copper engraving by Matthäus Merian depicts the Athenian naval defeat near Corinth over the Corinthian and Spartan fleet around 430 B.C.E.
"Thucydides, an Athenian, wrote this history of the war between the Peloponnesians and the Athenians, from the moment the conflict broke out, for he believed that it would be a great war and more worthy of remembrance than any that had preceded it. This belief was not without its grounds."
Advertisement:

The Peloponnesian War (431-404 BCE) was the largest conflict in the Greek city states era. It pitted the Athenian-led Delian League (sometimes also known as the Athenian Empire or Athenian Hegemony) against the Spartan-led Peloponnesian League. The causes of the war was the result of a century plus simmering conflict in Ancient Greece that resulted from the development of Democracy in Athens, and its consequent triumph and expansion in power, wealth, and influence in the Greco-Persian Wars. Sparta was wary of Athens' rise in power and influence even if they had allied with Athens during the Second Persian Invasion. A society that was always paranoid about helot uprisings inwards always believed in maintaining stability across Greece to better defend their society. The Athenians for their part were flush with success, confidence, and pride at their institutions and military success and under the statesman Perikles, launced an extensive investment in public works that resulted in several majestic works of sculpture and architecture, of which the Parthenon is the most famous and enduring monument.

The Athenians dominated naval trade across the Aegean Sea, and established extensive colonies and polis (i.e. city-settlements) across Greece and in process exported their form of democracy across Greece. The catch was their colonies were expected to pay taxes, and attempts to rebel or resist Athenian Hegemony were dealt with harshly. Athenians found allies in those communities who supported or welcomed their democracy, such as the village of Methymna on the island of Lesbos, but found opponents among oligarchs who clamored for old privileges and who looked to Sparta to restore order. The Spartans, for their part, were reeling from some incidents close to home, namely an earthquake in 463 BCE which destabilized the region and led to a helot uprising that the Spartans put down harshly. The Spartans even called its allies across Greece, including Athens, for help in putting down some of these uprisings, but famously, when the Athenians showed up to help, the Spartans turned them away, which the Athenian general, Cimon, saw as a snub but which the Spartans believed was necessary because they believed the Athenians would back the helots. Athens and Sparta did sign a pact called the Thirty Year Peace which identified and recognized different spheres of influence and non-intervention but this was tested when the Athenians intervened and put down a rebellion in Potidaea (where Sokrates himself served in battle). Then there was the Corinthian War where Corinth went into a clash with the island settlement of Corcyra, who turned to Athens for help, leading the Athenians to fight the Corinthians and repelling and making the Corinthians then turn to Sparta to agitate for war against the Athenians.

The immediate cause of the war was the Theban incident, where Thebes got into conflict with Platea who were backed by Athens. This sparked a small civil war. The Spartans decided to intervene on the side of Thebes, and this led to a stealth invasion which saw vicious streetfighting and notably one of the few times where Platean women and slaves actively participated in house-to-house combat in the Ancient World. Plateans allied with Athens, and the Spartans and Thebans upon victory summarily executed and killed all the rebels after swearing peace, an act of violence that shocked the Greek World and set the stage for the Serial Escalation of violence on both sides that would ensue in the course of the war. In terms of actual responsibility for the outbreak of war, there's a real debate and doubt as to who's responsible for it. Athenians, under Perikles, claimed that the Spartans had refused all offers of arbitration by a neutral party to resolve their diplomatic dispute. According to the Thirty Year Peace agreement, any dispute between them could be settled by a neutral third power, and refusal to arbitrate meant war. Historians point out that by the onset of the Peloponnesian War, Athens and Sparta had spread their wings so far across the entire Greek World, that it was virtually impossible for them to find a neutral third party. By that time both states had burned bridges with neighbors or bribed other neighbors that literally no one was uninvolved or indifferent to both Athens and Sparta. So Perikles making an issue of arbitration was his way of making Sparta look like the bad guy. The Spartans for their part were paranoid about helot uprisings and quite private and committed to secrecy, and likewise set nothing down in writing, which makes it hard to assess their actual behavior in this conflict.

The war can be separated into three phases:

Phase One lasted from 431-421 BC. It ended with a stalemate after the Battle of Amphipolis where the Athenians lost but the Spartans scored a Pyrrhic Victory and this led to the Peace of Nikias. This phase established the Athenian Navy as a preeminent dominant force in the sea, able to suppress dissent in its empire as well as foil Spartan invasions in the Athenian home state of Attica. The Spartans laid siege on Athens but its long walls and its navy allowed Athenians to hold them at bay, with the two sides (a major land power against a major sea power) effectively balancing each other out. The Athenians suffered a major setback in the Plague of Athens which broke out in 428 BCE and killed thousands in the city, including Perikles himself. In the aftermath, the Athenian General, Demosthenes scored a brilliant victory at the Battle of Sphacteria where he forced the Spartans to surrender (something Spartans are usually not supposed to do) and this led the Spartan General Brasidas in a brilliant counter-campaign to win over moderate allies in the North of Greece. At the Battle of Amphipolis, Brasidas died, as did Kleon, Athens' War Hawk political leader. The death of both figures allowed for a period of peace. Between the two phases, both Athens and Sparta recuperated while still putting down rebellions. The Athenians most famously submitted the Island of Melos to harsh reprisals during this time.

Phase Two saw an attempted Athenian invasion of Sicily in 415 BC. The war pitted Athens against the city-state of Syracuse, which was nominally supported by Sparta. The Athenians expected support and help from local anti-Syracusan states but this support never materialized upon their arrival. Instead the expedition turned into almost proverbial military disaster and would be cited by classically educated Europeans for centuries, much like the Vietnam War is by Americans of our time. In a shocking turn, the entire invading Athenian army was massacred in 413 BC, changing the tide of the war. Alkibiades, the commander who proposed this invasion, was called back to face what are most likely highly trumped up charges of religious impropriety and blasphemy. Instead Alkibiades defected to Sparta after reaching Sicily, and warned the Syracusans of the Athenian presence and expedition, and further advised Sparta to build a fortress in Attika, called Dekelia, from which the Spartans could more permanently and lastingly besiege and attack the Athenian countryside. Alkibiades' back-and-forth switching of sides in this time would make him proverbial, and controversial.

Phase Three, the "Ionian War," was the final phase of the conflict. The Spartans besieged Athens by land, and the Athenian Navy was unable to break the siege, though it could supply itself with grain due to the lack of a significant Spartan naval presence. With support from the Persians, and under the leadership of its general Lysander, Sparta began to develop a powerful navy, and it began to fight the Athenian navy across the Aegean Sea. With the Battle of Aegospotami (near modern-day Turkey) the Spartan Navy won a decisive victory over that of Athens. This defeat marked the end of the Athenian Empire, which surrendered in 404 BC.

The Aftermath of the Peloponnesian War lingered for decades afterwards. After conquering Athens, Lysander ordered the destruction of its walls and forced Athens to enter the Peloponnesian League and then demanded that Athens remove its democratic system in favor of an oligarchy run by Thirty Tyrants. These Thirty Tyrants, of which the most notable is Critias, a former student of Sokrates, submitted Athens to a Reign of Terror that was especially violent and shocking by the standards of its time, with thousands murdered for political reasons by the Thirty until a revolution led by Thrasybulus deposed the Thirty and restored the democracy. The Spartan King Agis II had grown weary of Lysander and disliked the Thirty and so eventually the Spartans helped the Athenians to restore democracy. However in the aftermath of that, a climate of fear and disgust persisted, leading to the Trial and Execution of Sokrates in 399 BCE. At the end of the war, Sparta reigned as the superpower of Ancient Greece which lasted until their defeat at the Battle of Leuctra and the rise of the Macedonians as the Hegemon of Ancient Greece.

Other tropes from the war include:

Works about the war: