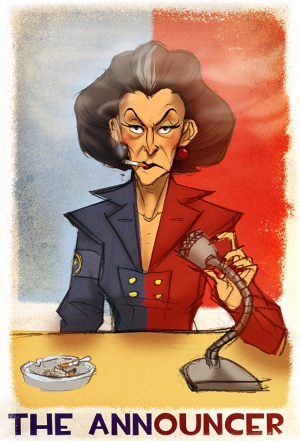 She calls the game for both RED and BLU.note Image by Makani.

In the official comic, she wears a purple outfit based on this art.
Storm Shadow: So why do you keep [the mask]?
James McCullen: So that I never forget the most important rule in dealing arms.
The Baroness: Let me guess: 'Never sell to both sides'?
James McCullen: Never get caught selling to both sides.
— G.I. Joe: The Rise of Cobra

In any war, there are those that will benefit from the fighting and destruction that it causes. This trope is about when somebody realises this and dupes or manipulates a couple of different groups into fighting each other so that they can turn the chaotic scenario to their advantage.

They could be plotting to take over one of the factions once the war's finished. They could be trying to wipe out both factions. They could be trying to get one side to change from being a neutral party into an ally or perhaps they are trying to use the situation to look good, making the outsider seem like the reasonable party for their involvement in the conflict. Maybe they just want to use the war as a diversion so they can carry out their own plans. There are many ways to benefit, but the crux of the trope is that there is a conflict and somebody has plotted to make that conflict for their own benefit.

Supertrope to Divide and Conquer, which is specifically getting groups to fight to wear each other down so that the plotter can conquer them more easily, and War for Fun and Profit, when someone plans to make money and/or gain amusement from the conflict. Related to the Batman Gambit, since this trope will often rely on some behavior predictions and Flaw Exploitation and the Kansas City Shuffle because such a plan is very dependent on misdirection. If the planner can still benefit by the misdirection failing, then it could be a Xanatos Gambit.

This is a risky Evil Plan to attempt, but not without backup perks. Should one side realize they're being played, they could turn against the manipulator, who in turn could "ally" himself with the remaining side for safety purposes. It would also continue to perpetuate the conflict while the manipulator prepares to reap the rewards (best-case scenario) or get out of dodge (bad scenario).

An even rarer collapse involves both sides catching on and deciding that life would be better without the manipulator. This worst-case scenario is usually solved with the manipulator getting as far away from the now-incensed ex-pawns as possible, if such a possibility is available. If not, the manipulator will likely succumb to the temptation to cancel their own subscription to life.