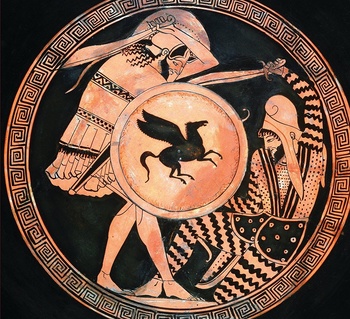 Red-figure pottery depicting a Greek warrior and a Persian warrior.
"This is the display of the inquiry of Herodotus of Halicarnassus, so that things done by man not be forgotten in time, and that great and marvelous deeds, some displayed by the Hellenes, some by the barbarians, not lose their glory, including among others what was the cause of their waging war on each other."
— The beginning of Herodotus' Histories
Advertisement:

This is one the most mythologized wars in the history of Western Civilization. The basis of the conflict was laid when Cyrus the Great founded the Persian Empire, in the process conquering several Greek colonies in Asia Minor. Under Darius, a successor of Cyrus', several of these Greek cities mounted the Ionian Revolt in 499 BC and enlisted the help of kinsmen across the sea, notably Athens. After crushing the rebellion Darius dispatched an invasion force against Athens in 492 BC, but this was defeated two years later on the field of Marathon.

In 480 BC Darius' successor, Xerxes, after he had persuaded the rest of The Empire to accept him as King, launched a massive second invasion of Greece. He was delayed by the Spartans at the mountain pass of Thermopylae and by the Athenian fleet at Artemisium, however Xerxes continued to march on until he arrived at Athens. Athens had been evacuated, which deprived the Persians of the human part of their Plunder when they sacked it. The Persians mused over their "capture" a little when they received a message that the Athenian politician Themistocles intended to defect. Xerxes took the offer, but Themistocles lured the Persian fleet into an ambush, resulting in its destruction in the Battle of Salamis.

The next year a combined army drawn from several city-states (including Athens and Sparta) destroyed what was left of the Persian invasion force at Plataea. A final victory of allied Greek forces at Mycale drove the Persians from the Aegean and pretty much secured the independence of Greece from Persia.

See Alexander the Great's campaign against Persia for the sequel, and The Peloponnesian War for the depressing spin-off featuring the most popular factions from the original turning on one another.