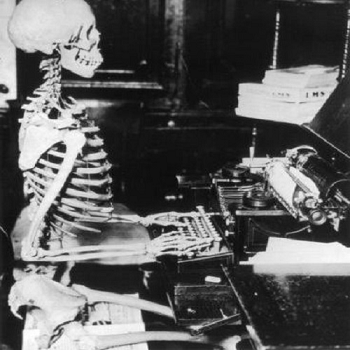 This person just got around to the bare bones of the next story.
"Chaucer's The Canterbury Tales was expected to clock in at anywhere between 100 and 120 chapters. Unfortunately, the dude only managed to finish 24 tales before he suffered an insurmountable and permanent state of writer's block commonly known as death."
— Cracked, "7 Lost Bodies of Work (That Would Have Changed Everything)"

A fandom's worst nightmare: A creator dies before completing their work, leaving it orphaned.

If readers are lucky, the author had enough warning or foresight to keep notes on their plans for the rest of the series or at least fill someone else in on the most relevant plot points, so that their work can be continued by another author, or possibly even several. This may result in the series Jumping the Shark if the replacement isn't very good, but at least you have closure. Worse would be if the series just isn't popular enough to justify going through the effort to find a new author, leaving fans to wonder What Could Have Been.

This can also happen with individuals who play a major role in creating a group work; for instance, directors. In any case, it gets to be pretty sad that so many people lose their jobs because of one person's death, but if the work was good enough it's likely that those who worked on it won't have too much trouble finding another job.

If the author is still alive but decides to quit, they're preventing a Franchise Zombie.

Please note that this trope applies when a creator (writer, director, etc.) ceases work on a project, not a participant (actor, well... mostly actors) unless they had significant input.

Also note that since all creators are mortal, this is not merely when creators die, it's when they die with works still in progress.

This might result in The Character Died with Him (where the show goes on without the character a dead actor portrayed), Actor Existence Limbo (where a character previously with a voice role does not have a voice in future episodes) or Fake Shemp (where there is an attempt to disguise the absent actor).

Not to be confused with Death of the Author (a criticism trope), Apocalyptic Log or Creator Killer (where the author merely falls from grace and loses their reputation as a result of a failed work).

See also Swan Song (when the production is the creator's very last creation), Fatal Method Acting (when this happens because of the production) and Posthumous Credit (when someone gets credited on a work after their death).