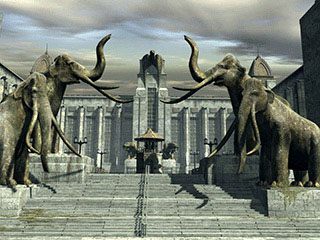 Kate Walker, a lawyer working for an American toy company, comes to the remote French village of Valadilène to finalize the purchase of the local toy factory. Upon arrival, she learns that the owner of the factory, Anna Voralberg, has recently passed away, but there is an heir, Anna's long-lost brother Hans. She also learns that the factory doesn't produce mere "toys", but instead, "automatons", Ridiculously Human Clockwork Creatures imbued with a soul by their inventor, who is none other than Hans himself. Both intrigued by Hans' eccentric persona and determined to finish the deal, Kate embarks on a surreal journey through all the failed utopias of Europe in pursuit of the elusive craftsman, whose life goal is to reach Syberia, a mysterious island where mammoths are rumored to still exist.

Syberia (not to be confused with that cold, unfriendly place in Russia called Siberia, or with an older game titled Cyberia) is a Clock Punk Adventure Game duology, developed by Microids, designed by Benoit Sokal, and written by Catherine Peyrot. Originally planned as a single game, it was split in two due to Executive Meddling, with Syberia being released in 2002 and Syberia II, in 2004. The original game became an epic Flame Bait immediately after the release: while the hardcore, long-time adventure gamers panned it for a simple story and primitive puzzles, the newer generation (many of them introduced to the genre through Syberia in the first place) universally admired its artwork and atmosphere, considering it a Spiritual Successor to The Longest Journey classic. When the second game came about, most players who expected a repetition of the Syberia wonder were disappointed, for the original atmosphere has been lost in development, which many attributed to Sokal's lack of involvement with it.

Microids has announced Syberia 3 as far back as 2009, with Benoit Sokal back in the director's seat. The game was originally to be an Intercontinuity Crossover with the Post Mortem/Still Life series (also by Microids), where Kate would have teamed up with Victoria McPherson, — although this ultimately proved to be an April Fools' Day joke by the publisher. At some point after the initial announcement, work on the game has been apparently quietly stopped, before it was Un-Canceled again in 2012 and eventually just as quietly released onto Steam and the PlayStation 4 on April 20, 2017.

In August 2019, Microids announced that work is underway on the next chapter of the franchise, Syberia: the World Before. A demo called Syberia: The World Before - Prologue was made available October 9, 2020. Sokal tragically died of illness in May 2021, leaving his co-writer Lucas Lagravette (who also worked on 3) to lead the project to completion.

This series offers examples of:

Finding the right tune for the church bells opens reveals the keyhole to open the crypt.

Example of:
For Doom the Bell Tolls

Finding the right tune for the church bells opens reveals the keyhole to open the crypt.