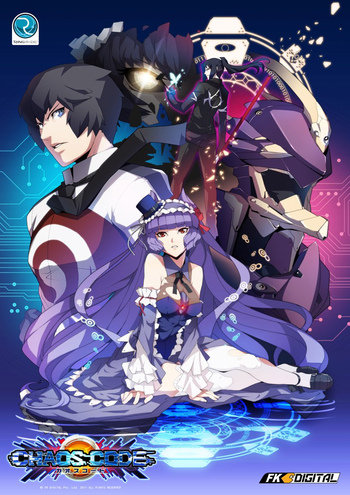 In an indistinguishable period of time in the near future, a man named Arthur Tesla discovered a new, volatile, yet powerful source of energy. Due to it's unpredictable nature, this new energy source became known as "Chaotics".

It didn't take long for Chaotics to become integrated into human life. It proved to be so efficient and self-sustaining that mankind evolved at a disturbingly fast rate over the course of a decade. However, despite his newfound success, Tesla seemingly vanished off the face of the earth, leaving nothing behind except for one final message to humanity: To seek out and claim a mysterious object known as the "Chaos Code", the prize being anything one could dream of.

It soon doesn't take long for every major faction on the planet to begin a worldwide hunt for the Chaos Code, all for their different reasons. One such faction, the global political superpower known as the Earth Union, sends out one of their soldiers, sub-lieutenant Hikaru Otagi, to investigate a possible lead to the Chaos Code and to apprehend a key member of the anti-Earth Union terrorist group known as Kurenai. However, someone lurks in the shadows, seeking to gain the Chaos Code for their own twisted purposes...

Chaos Code is a Fighting Game developed by FKDigital and published by Arc System Works. The gameplay borrows heavily from ArcSys' own titles such as the Guilty Gear and BlazBlue, with a key emphasis on long combo strings, all while adding its own unique twist.

Mainly, the game gives the player the choice of picking extra special moves and/or super moves (or Ultimate Chaos moves) after you pick your character. In the heat of battle, there is a plethora of tactical options, such as guard break attacks, parries, a dodge roll, and the universal Super Mode known as Exceed Chaos, which grants your character access to buffs such as fully cancellable normals, regenerating health, and repeatable EX moves at the cost of three full special meters.

The other major draw of the game lies in its characters. How about cooking your opponents in a giant pie as a giant, musclebound chef? Or perhaps awe them into submission with a Camp Gay young man(?) that attacks by donning several different costumes? Or if that's too orthodox for you, how about fighting with not one single character, but a pair of twins that leave the Ice Climbers crying in shame due to their lack of team work?

Chaos Code hit the Arcades first in August 2011 and eventually made it to the PS3 on December 2012. In 2017, an Updated Re-release titled Chaos Code: New Sign of Catastrophe was released for PS4 and for PC, then released on Nintendo Switch via the Nintendo eShop on March 26, 2020, albeit with several features missing, with a physical version releasing in December 2022. A sequel, Chaos Code NEXT: Next Episode of Xtreme Tempest, was announced in January 2020, but cancelled the following month. However, teasers popped up hinting that development picked up again in late 2021, and in April 2022, NEXT was confirmed to be back in development, with a public showcase taking place at KGP on the 30th of that month.