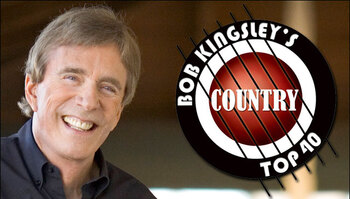 After 27 years with ACC, Kingsley took the show's format over to Jones Radio (now Dial Global) to create Bob Kingsley's Country Top 40 while Kix Brooks assumed ACC. Country Top 40, or CT40 as the show is sometimes referred to, presents the top 40 country hits for each week according to Mediabase (as opposed to the Billboard charts, which ACC would continue to use through 2009). Other features include listener requests (one per show; two until summer 2014), "CT40 Vault" (a previous #1 hit preceded by snippets of other previous #1 hits, the entireties of which can be listened to online; this feature replaced the second listener request in summer 2014), a handful of classics, stories behind the songs, and interviews with artists. Another feature is "CT40 Flashback", done once a month, which presents several facts on a given year, followed by snippets of the top 5 country hits on the current month in that year. As was the case on ACC, he blocks out the last countdown of the year to present the top 50 hits of the year, calculated with his own methodology.

In October 2019, Kingsley announced he had been diagnosed with bladder cancer and would be departing the show, the intention that it would be a temporary departure. Prior to his departure, he struck an agreement with the Country Music Association to provide guest hosts for the program, all of them female country music stars, through the program airing the weekend of November 30, 2019. Sadly, Kingsley died of cancer just more than a week after the announcement. Following the rotating female guest host series, country music superstar Garth Brooks hosted the final four programs of 2019, including the year-end show on December 28, which Brooks co-hosted with his wife, Trisha Yearwood; additionally, Kingsley’s “Christmas In America” was set to be a “best of” program, collating highlights from the past 25 years.

Beginning with the January 4, 2020, program, radio personality Fitz was named the new host of CT40 and joined Kingsley's KCCS Productions.