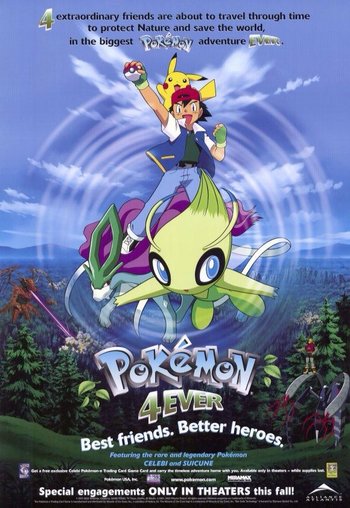 A wibbly wobbly timey wimey adventure that includes a water dog, an evil Steampunk man, and an onion fairy.
Advertisement:

Pokémon 4Ever, also known as either Celebi: Voice of the Forest in the English version or Celebi: A Timeless Encounter in Japan, is the fourth Pokémon: The Series film, released on July 7, 2001. It was once again directed by Kunihiko Yuyama and written by Hideki Shirane.

A long time ago, a little forest guardian known as Celebi is chased by an unknown Pokémon poacher. A young Trainer, Sam, saves Celebi, and the two travel through time. In the present day, a member of Team Rocket, known as the Iron Mask Marauder ("Vicious" in Japanese), confronts the now old poacher and destroys his home, taking a Tyranitar with him.

Ash, Misty and Brock see a Suicune, and Oak tells them about the legendary Pokémon. While in the woods, they see Sam, and they befriend him. Unfortunately, the Iron Masked Marauder plans to capture Celebi for himself, and he plans to overthrow Giovanni in the process.