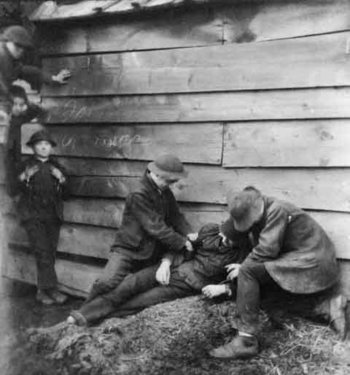 A Growler Gang demonstrates for the photographer how they make their living robbing drunks: New York City, 1890
Fall asleep in the gutter around here? He needs educating. You're doing him a favour! But who is he, when he's not snoring in three inches of street-slurry?
Fallen London
Advertisement:

To roll a drunk is to find someone who has passed out drunk and go through their pockets looking for valuables. Sometimes the thief will tail a drunk, waiting for them to pass out.

Requiring no skill or courage on the part of the thief, drunk rolling is generally regarded as the lowest form of theft and (in fiction at least) those who practice it are treated as the lowest echelon of the underworld.

In extremis, a hero who is strapped for cash may be forced to attempt this. Expect them to be humorously bad at this, and for hilarity to accompany their attempts.

Related to Robbing the Dead.

Organ Theft could be considered a specific instance of this, where one's organs are stolen while intoxicated.

Needless to say, this does occur in Real Life. The term "rolling the drunks" originated in 19th century New York, when tavern owners would tip off a local gang when a suitably inebriated customer was leaving the premises. The gang would "roll" the drunk into an alley and swiftly and efficiently relieve him of valuables, with possibly a blow to the head if he wasn't already passing out. The gang would pay the tavern owner a percentage of the take for the tipoff.