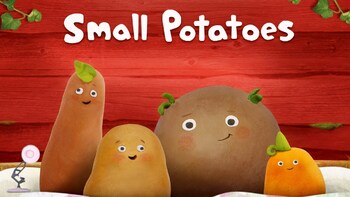 Small Potatoes is a British children's animated series about... small potatoes, as hard as that may be to believe.

More specifically, this show is about the four small potatoes in question, Nate, Ruby, Olaf, and Chip, singing songs. Each three-minute-long episode showcased a song sung by the potatoes that had to do with a specific topic (e.g. feelings, art, the seasons, raindrops, etc.)... and that's about it. Pretty simple stuff, really.

The show was created by Josh Selig, the same person who created Oobi and Wonder Pets!. In the UK, this show aired on CBeebies; in America, it aired on Disney Junior.