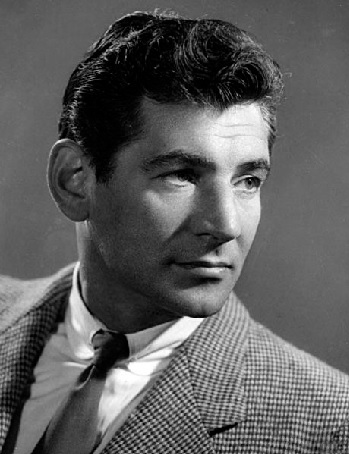 "The other night I dreamt of knives, continental drift divide, mountains sit in a line--"
"To achieve great things, two things are needed: a plan, and not quite enough time."
"To be a success as a Broadway composer, you must be Jewish or gay. I'm both."
— Leonard Bernstein
Advertisement:

Leonard Bernstein (August 25, 1918 — October 14, 1990), composer, lecturer, and conductor, was one of the most famous and successful American musicians of the 20th century.

Born in Massachusetts to Russian Jewish immigrants, Bernstein began taking piano lessons when he was ten. He went on to study music at Harvard University and the Curtis Institute of Music, learning from such musicians as Walter Piston, Fritz Reiner, Randall Thompson, and Isabelle Vengerova. He also studied in Paris with the legendary composition teacher Nadia Boulanger. Bernstein became famous as a conductor when he substituted for Bruno Walter at a concert by the New York Philharmonic Orchestra; he later went on to being the director of that orchestra from 1958 to 1969.

As a conductor, Bernstein is best known for conducting performances of works by his fellow American composers, such as Aaron Copland and Charles Ives, as well as works by Joseph Haydn, Robert Schumann, Igor Stravinsky, Dmitri Shostakovich, and Gustav Mahler.

Bernstein was known for his innovative ideas of how to educate the public in music. He was one of the first classical musicians to make frequent television appearances, producing dozens of Young People's Concerts for CBS in the '50s and '60s. In 1973, he made a series of six videotaped lectures at Harvard University. He titled these lectures The Unanswered Question after a composition by Charles Ives. These lectures were later broadcast on PBS, and are available today in book form and on DVD.

Bernstein composed works in a variety of genres, including symphonies, suites, pieces for choir and solo voice, and chamber music. His works for the stage include the ballets Fancy Free and Facsimile, the comic opera Candide (based on the novella by Voltaire), the one-act opera Trouble in Tahiti later expanded on by the sequel A Quiet Place, incidental songs for a semi-musical production of Peter Pan, and the musicals On the Town, Wonderful Town and West Side Story (and its film adaptation), the work for which he is most well known. Bernstein also composed the score for the film On the Waterfront, and his music featured in films from Hitchcock's Rear Window to Man on the Moon and television productions from The Muppet Show to Ugly Betty and Glee.

Bernstein was married to actress Felicia Cohn in 1951 and had three children. He was discreet about his sexuality, but he eventually left his wife and moved in with his male lover. However, when his wife was diagnosed with lung cancer, Bernstein moved back in with her and cared for her until her death in 1978. Bernstein's daughter would eventually confirm that he was bisexual.

He died of pneumonia in 1990, not long after conducting a performance of works by Benjamin Britten and Beethoven at the Tanglewood music festival. As his funeral procession made its way through Manhattan, construction workers were said to have waved their hats in the air and shouted: "Goodbye, Lenny!" He was buried with a conductor's score of Gustav Mahler's Symphony No. 5 placed on his chest.

He is the partial Trope Namer of Something Something Leonard Bernstein. The song came out in 1987, and he died in 1990, so it's entirely possible he was aware he was in the song.

The fall of the Berlin Wall 30 years ago, on November 9, 1989, changed the world. Leonard Bernstein's legendary live recording of Beethoven's Ode To Freedom (Symphony No. 9) captured not only the elation of the moment but conveyed a celebration of and a longing for freedom which extended far beyond the occasion.

The fall of the Berlin Wall 30 years ago, on November 9, 1989, changed the world. Leonard Bernstein's legendary live recording of Beethoven's Ode To Freedom (Symphony No. 9) captured not only the elation of the moment but conveyed a celebration of and a longing for freedom which extended far beyond the occasion.