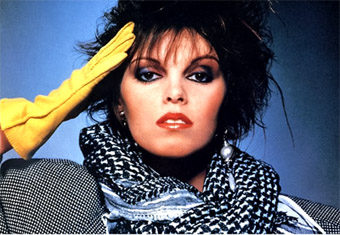 Pat Benatar (born Patricia Mae Andrzejewski, January 10, 1953 in Brooklyn, New York City) is a rock singer. She is one of the top-selling female vocalists of all time, with sales of over 13 million copies in the US alone. Her best-known songs include "Love Is a Battlefield" and "Hit Me With Your Best Shot."

She won four consecutive Grammy Awards for Best Female Rock Performance, from 1980 to 1983. She has also won three American Music Awards and has been inducted into the Long Island Music Hall of Fame. In 2022, Benatar and her husband and primary musical partner Neal Giraldo were inducted into the Rock & Roll Hall of Fame.

She is unusual among pop stars in that she was operatically trained before switching to hard rock.

Peter Quill named his second ship after her.

"Hit me with your best trope":