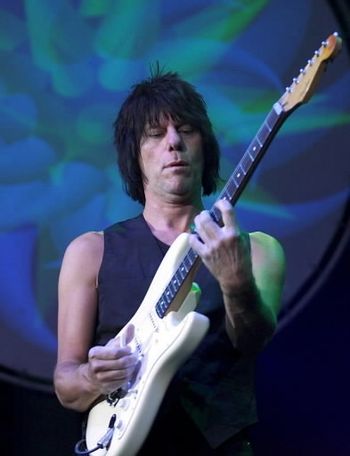 Jeff Beck in recent years, doing what he does best.
"I was interested in the electric guitar even before I knew the difference between electric and acoustic. The electric guitar seemed to be a totally fascinating plank of wood with knobs and switches on it. I just had to have one."
Advertisement:

Geoffrey Arnold "Jeff" Beck (born June 24, 1944) is a British musician that first made his name with the Blues Rock unit The Yardbirds, but over his fifty-year career has also put his stamp on jazz, soul, blues, heavy metal, and electronica. Because he has succeeded almost entirely on his skill as a guitarist - never chasing pop trends and rarely either writing or singing - Beck has earned a paradoxical reputation as a "musician's musician" despite recurring problems working with other musicians.

Rolling Stone recognizes him as the fifth greatest guitarist of all time on their list of 100 Greatest Guitarists of All Time.

Not to be confused with Beck. Or Glenn Beck.