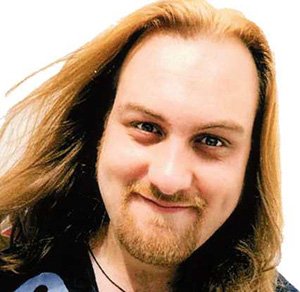 "That's how it is with me, folks. Slightly grim, slightly rude, reassuringly clever."
Advertisement:

Mitchell John Benn (born 20 January 1970) is a British satirical songwriter, best known for his topical comedy songs on The Now Show. His favourite topics include James Blunt, Coldplay and Twitter (where he had a feud with Stephen Fry, which was settled when Fry agreed to make him 'Viceroy of Facebook' in return for Benn giving up the quest to be 'King of Twitter'.) He is Liverpudlian-Scottish and looks a bit like a Viking. He has released several albums, some solo and some as 'Mitch Benn and the Distractions'.

He's done two other radio shows: Mitch Benn's Crimes Against Music started out with him discussing various aspects of music and musicians with Robin Ince, before the third series became a sitcom about him and Ince going on tour. Either way, the plot was an excuse for him to play his songs and Ince to be rude about them. The Mitch Benn Music Show is simply him showcasing his favourite comedy records by others. He also made the Mitch Benn Specials in 2005, following on from the radio adaptation of his stage show Mitch Benn is the 37th Beatle, but looking at the influence of other musicians. The episodes were: "The Freewheelin' Mitch Benn"; "Mitch Benn is the Fat Pink Duke" and "Mitch Benn Has Left the Building".

His first novel Terra was published in July 2013. You can see some of his celebrity friends reading the first chapter here

. Terra's World was published the following year, and a third installment, Terra's War published in 2021.