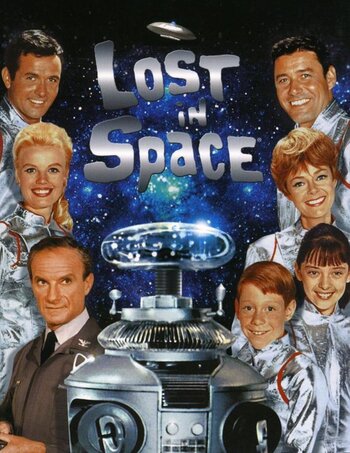 Classic camp sci-fi family series from the Sixties that lasted three seasons. Featured the adventures of the Space Family Robinson, Major West, the Robot and shanghaied saboteur Dr. Smith as they search for Earth, after they become Lost... In Space.

Lost in Space was a rival for Star Trek: The Original Series in the realm of serious sci-fi, which might explain the show's turn from serious Speculative Fiction into Fantastic Comedy to keep a share of the viewing audience. Ratings wise, Lost in Space was actually the more popular series by far during their original run. Notable for its beautiful music (including two opening themes by Johnny Williams, sets, skin tight ski-spacesuits, aliens, inventive and surreal plots, and highly articulated Robot, itself a "cousin" of Robby the Robot from the film Forbidden Planet (who also guest starred on the show). The original plot had the Robinsons as explorer/settlers, with Dr. Smith as a saboteur paid by an unseen agency to program The Robot to kill the Robinsons and ruin their mission. This show is often mocked by those who only remember the comedy and talking carrots of the later seasons, but is actually an often well-written show suitable for all age groups. It has a loyal fanbase, and inspired many. The first episodes were in black and white and involved exploring the planet they crash-landed on. When the show shifted to camp it involved their conflicts with resident or visiting aliens of all sorts. In the 3rd season, the formula was altered to feature more actual space travel, as well as a more action based format.

One of a family of shows created by Irwin Allen, along with Land of the Giants, Voyage to the Bottom of the Sea, and The Time Tunnel.

May well be one of the classics of sci-fi for no other reason than the scene-chewing Large Ham glory of Jonathan Harris (Dr. Smith) and his pained and witty repartee with the Robot. While its going from serious to camp may well have been a blow to later efforts at serious sci-fi, it was nonetheless a surreal joy to watch. The recent attempts to reboot it as a serious series may be doomed to fail because of this, as it's best remembered as a humorous series.

The low budget of the show was apparent in later episodes, but the shows original unaired pilot was the most expensive of the time, and the show's Spaceship sets were more expensive than Star Trek's Starship Enterprise.

The series received a film adaptation in 1998. It was a modest box office hitnote best remembered for knocking Titanic (1997) out of the #1 box office position it had occupied for four months but often dismissed as a "dim-witted shoot-'em-up" by critics. An attempt to create a television remake in 2003-2004 went nowhere. In 2015, Netflix announced that they would try their hand at creating their own adaptation, which was released on April 13, 2018.

Not to Be Confused with some sort of strange sci-fi cast-away show; that would be Lost In Space!

Also not to be confused with the comic book Space Family Robinson.

The ensemble consisted of:

Lost in Space provides examples of: