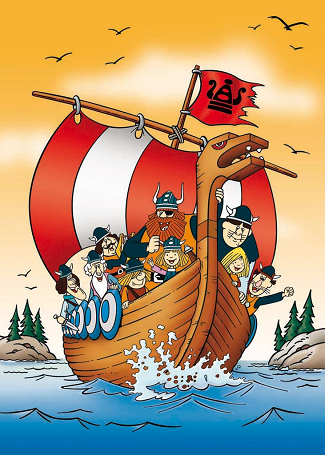 We so horn-ed, we raid you long time.
We come from the land of the ice and snow
From the midnight sun where the hot springs flow
The hammer of the gods
Will drive our ships to new lands
To fight the hordes and sing and cry
"Valhalla, I am coming!"
On we sweep with, with threshing oar
Our only goal will be the western shore!
— Led Zeppelin, "Immigrant Song"
Advertisement:

The more Northern, cold-climate cousins of the Pirate, native to Dark Age Europe, who spend a lot of their time cruising in their Cool Boats, pillaging and burning any hapless peasant villages that happen to get in their way.

Vikings in fiction tend to feature elements of The Berserker and Proud Warrior Race Guy, are seldom seen without those spiffy horned helmets and are sometimes adorned with Pelts of the Barbarian. Vikings are always quite hairy, with long beards and longer Braids of Barbarism flying in the ocean breeze. Being Nordic, most of them are blonde or red-headed, but black-haired Vikings are as common as they were in real life. Expect them to approach aboard intimidating, monster-headed longships, fierce men aboard fearsome boats.

The trope name is a pun on Vikings' reputation for raping and pillaging, and the horned helmets that they never actually wore. The horned helmet stereotype started with the Romans, who attributed such helmets indiscriminately to all kinds of Northern barbarians; later this was reinforced by some archeologists digging up a Viking helmet near a couple of drinking horns and assuming that they had once been one piece. Horns on a helmet would actually sabotage its effectiveness, providing a joint to catch incoming blows rather than deflect them. Horned helmets may be replaced by the (equally unhistorical) winged helmets, especially when the work wants to present the Vikings as noble rather than barbaric.

The Hooligan tribe on the Isle of Berk is a viking tribe who has fought a 300 year with with the dragons that invade them.

The Hooligan tribe on the Isle of Berk is a viking tribe who has fought a 300 year with with the dragons that invade them.