This Is a Song 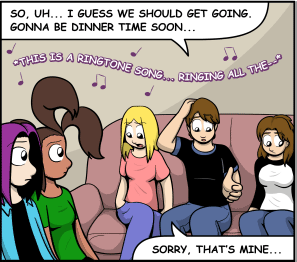 Sarah's ringtone is very descriptive.
"Joss, that song had no content. It wasn't even about the movie, it was about itself! That's like breaking the ninth wall!"
— Jed, Ten Dollar Solo, Commentary! The Musical
Advertisement:

A song that is, at least partially, about itself.

When Medium Awareness meets music. There are quite a few songs in which the lyrics explicitly reference the fact that... well, it's a song. However, since listing every example that does this would be practically impossible, this trope limits the range to songs that don't just break the fourth wall, but, in fact, are pretty much all about the fact that they're songs.

Mom and Dad are apparently aware that they are randomly bursting into song when it's their turn to sing.

Alternative Title(s): A Song About Itself

Mom and Dad are apparently aware that they are randomly bursting into song when it's their turn to sing.