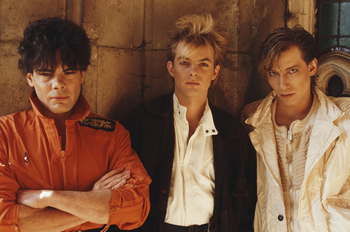 "Let us die young or let us live forever.
We don't have the power but we never say never.
Sitting in a sandpit, life is a short trip.
The music's for the sad men."
— "Forever Young"
Advertisement:

Alphaville is a German Synth-Pop/New Wave group that gained international popularity in the 1980s. The band was originally named Forever Young.

They are best known for their two biggest hits, "Big in Japan" note No relation to the Tom Waits song of the same name and "Forever Young,"note Not the Rod Stewart one, nor the Bob Dylan one both released in 1984. While "Forever Young" and "Big in Japan" managed to peak at 65 and 66, respectively, on the US's Billboard Hot 100, Alphaville have always been best appreciated in Europe, releasing a few top ten singles in several countries throughout the 80s. "Forever Young" has seen a new appreciation in recent years through several covers, remixes, and appearances in movie soundtracks and TV shows.

The founding members were Bernhard Lloyd, Frank Mertens, and singer Marian Gold. Frank Mertens left the band after the release of their first album, Forever Young, and was replaced by Ricky Echolette. This lineup produced the bulk of Alphaville's studio material, responsible for Afternoons in Utopia, The Breathtaking Blue, Prostitute, and Salvation. Echolette left the band during the production of Salvation. Alphaville existed for a while as just Bernhard Lloyd and Marian Gold, during which they released the anthology box sets Dreamscapes and Crazyshow. Lloyd officially left Alphaville in 2003note His involvement in Alphaville as a band member was basically finished after Dreamscapes released in 1999, though he still did managerial and promotional work until his official departure. He has continued to be involved in the remastering process for rereleases of older material.. The lineup for 2010's Catching Rays on Giant is Marian Gold, Martin Lister on keyboards, David Goodes on guitar, and Jakob Kiersch on drums. Fifth member, bassist Maja Kim, joined the band the following year. Martin Lister passed away in May of 2014. After his death, Carsten Brocker took over on keyboards. Maja Kim left the band in July, 2016. She was replaced by Alex Merl.

There was a young lady from Bright
Whose speed was much faster, much faster than light.
She departed one day
In a relative way
And returned on the previous...