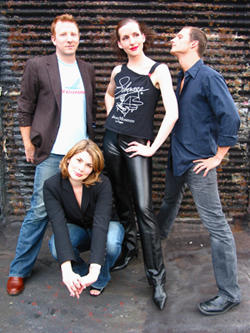 Most of the cast...except Larry.
"Ok, Larry, let’s fill out the rest of this form.
Number one, title of show. We got that: Title of Show!"
— Filling Out The Form
Advertisement:

In 2004, Jeff Bowen and Hunter Bell decided to submit a musical to the New York Musical Theatre Festival. With six weeks to write before the deadline and a desire to submit something original rather than an adaptation, Jeff and Hunter recruited a couple of friends to help them create [title of show], the musical that chronicles its own creation.

After the NYMTF, [tos] had a limited run off-Broadway in 2006 before closing. Two years later, the show opened on Broadway for another short run. Now showing in regional productions across the US and Canada.

Also notable for spawning the YouTube vlog the [title of show] show and the Spiritual Successor Now. Here. This..

The show has evolved with each incarnation but currently covers a period of time from Jeff and Hunter deciding to enter the NYMTF to the show opening on Broadway.