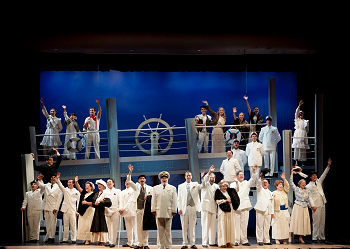 The Musical of the RMS Titanic's launching and eventual tragic sinking.

Yes, you read that right.

Titanic: The Musical, (or officially just Titanic) was a Broadway musical that opened in 1997 at the Lunt-Fontanne Theatre on the 23rd of April, starring John Cunningham as Captain E. J. Smith, Michael Cerveris as Thomas Andrews, and David Garrison as J. Bruce Ismay. The musical won 5 Tonys including Best Musical and Best Book of a Musical, and ran for two years. A UK production opened in 2018.

The plot of the musical follows the crew and passengers of the RMS Titanic as it makes its maiden voyage from Southampton to New York in April 1912. It focuses on no-one in particular, instead choosing to give almost every class of person on the ship a song and or a moment and therefore has no one single protagonist (Other than the Titanic herself, if you will).

The musical is also unique in that the Broadway stage could tilt to simulate the sinking of the ship, and that most of the characters are actually people who were on the Titanic with only a few names changed here and there and a few people who died lived and vice versa.

The relation to James Cameron's Titanic in the same year is probably just coincidental.