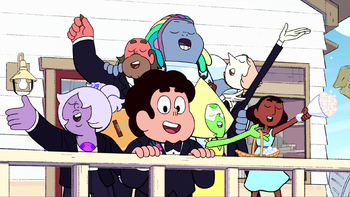 ♫For just one day let's only think about...♫
"If only someone could see
In eleven part harmony
Or maybe just unison..."
— Company, Crazy Ex-Girlfriend: "No One Else is Singing My Song

A common trope in musical theater, a song (often one that ends the first act) that sums up the attitudes of all of the main characters toward some upcoming event or towards something that happened earlier by having them singing all at once, with counterpoint for all.

Usually either a Reprise Medley or a Crowd Song, and often a Showstopper. In musical theater, this is especially common in Act 1 Finales.

Frequently overlaps with The Song Before the Storm, which refers to any large-scale songs about an upcoming confrontation.