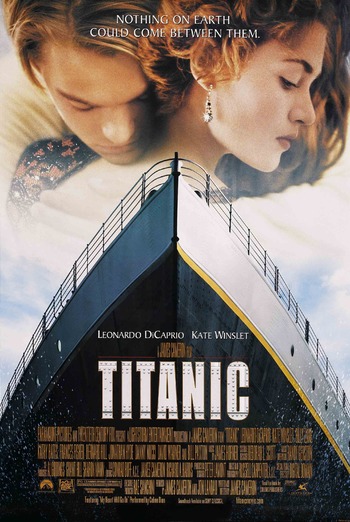 Except for one giant iceberg.
"It’s been 84 years, and I can still smell the fresh paint. The china had never been used. The sheets had never been slept in. Titanic was called the 'Ship of Dreams', and it was. It really was."
—Rose Calvert, 1996
Advertisement:

In 1996, a group of deep-sea treasure hunters are diving to the wreck of the RMS Titanic, hoping to find a valuable diamond that supposedly went down with the ship. They find the safe belonging to the passenger who owned it, but, upon its recovery from the wreck, find nothing...that is, except for an exquisite drawing of a beautiful woman wearing the diamond on the night Titanic sank. An elderly woman, Rose Dawson Calvert, calls the team after seeing the drawing on a television news report, claiming to be the woman in the drawing. The team brings her out to the middle of the North Atlantic, where she begins to tell her story about the sinking.

Titanic tells Rose's story in flashback, recounting her time in a Star-Crossed Lovers dynamic with artist Jack Dawson. Unfortunately, they both happen to be aboard the ill-fated eponymous ocean liner, which struck an iceberg and sank on its maiden voyage in 1912. Interlaced with this story are various other subplots, both historical and fictional, canvassing passenger life and the decisions and mistakes made by the authoritative figures aboard that culminated in one of the most infamous tragedies of the 20th century.

As such, Titanic's story leaps and bounds across genres, combining a historical docudrama, a Romeo and Juliet-esque romance, and a disaster movie with the scope and resources of an epic, fueled by cutting-edge technology ahead of nearly any film that came before it. The result was the most expensive movie ever made at the time turning into the highest-grossing film ever made at the time, going on to dominate the awards season and become one of the biggest cultural touchstones in cinematic history.

Directed by James Cameron, this movie won a record-tying 11 Academy Awards, including Best Picture, and launched the A-list careers of Leonardo DiCaprio and Kate Winslet. Its 14 nominations are also in a three-way tie for the record (and it's the only one of the three films to not be about Hollywood).

The film, after a well-publicized production cycle that overran its budget and schedule with the film ending up costing $200 million to produce, casting doubts on its box office chances, was released in theaters on December 19, 1997. Its original theatrical run lasted more than nine months, not ending until October 1, 1998. It was number-one at the American box office for a still-standing record of fifteen consecutive weeksnote E.T. the Extra-Terrestrial is the record holder for cumulative weeks at number one with 16, finally knocked off by Lost in Space on the first weekend of April 1998. Many of its longevity weekend records still stand today even with over two decades of inflation.

It's one of the few films of such significant length (195 minutes) that when it was released on VHS, it needed two cassettes to contain the entire film, and several passes on the disc format to get it on one disc at high quality (see Visual Compression below). As of 2020, it is the 3rd highest-grossing movie of all time, both in raw numbersnote passed only by Avengers: Endgame and Cameron's own Avatar and adjusted for inflationnote Gone with the Wind takes the top spot while Avengers: Endgame drops to fourth.

The film was re-released theatrically in 3D on April 4th, 2012, ten days before the 100th anniversary of the ship’s sinking.