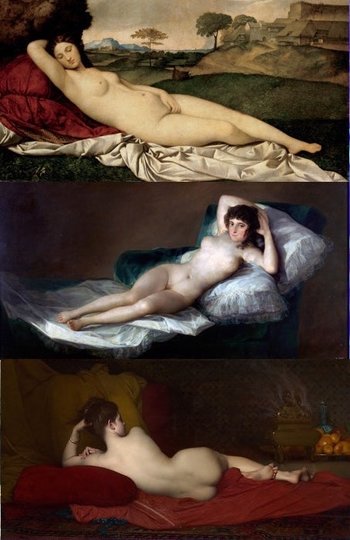 Sleeping Venus by Giorgione, The Nude Maja by Goya, and Odalisque by Lefebvre
"A nude never descends the stairs - a nude reclines."
— The Hanging Committee of the 1912 Salon des Indépendants exhibition in Paris, France

The Reclining Venus—alternatively known as odalisquenote a Frenchified form of the Turkish word odalik, "chambermaid" or simply Reclining Nude—is a Stock Pose in Western art depicting a woman reclining against a bed or couch, often in differing states of undress.

The implications of what is occurring in the image differs. Since admiration and idealization for the human form was common place in Ancient Greece and Ancient Rome, Classicists and their post-Renaissance successors preferred showing off the human body as a means of capturing the human form and all of its anatomical splendor. However, since much of history's remembered artists are men, Male Gaze is most definitely involved, the staging either implying the women are Ready for Lovemaking or are simply intimate enough with the artist that this would not be the first time they have been seen naked so causally. But make no mistake; It's Not Porn, It's Art.

While male depictions of the Reclining Venus do exist, since the paintings are universally recognized as Always Female, pop-culture usually plays gender-inversions of the trope as comedy.

Often times, the Reclining Venus position is associated, if not interchangeable, with "the Sleeping Nymph", a motif that began during The Renaissance involving a depiction of a woman (the eponymous "nymph") sleeping in a similar reclining position.

Can be considered a sister trope to Reclining Reigner and Sitting Sexy on a Piano. See other Art Subjects such as Death and the Maiden, Crucified Hero Shot and Nude Nature Dance. Related to Art Imitates Art and Life Imitates Art.

Charles Chatenay does a gallery show depicting various women in various states of undress. His progressive French artistic vision clashes rather violently with the sensibilities of Early 20th-century Americans.

Charles Chatenay does a gallery show depicting various women in various states of undress. His progressive French artistic vision clashes rather violently with the sensibilities of Early 20th-century Americans.