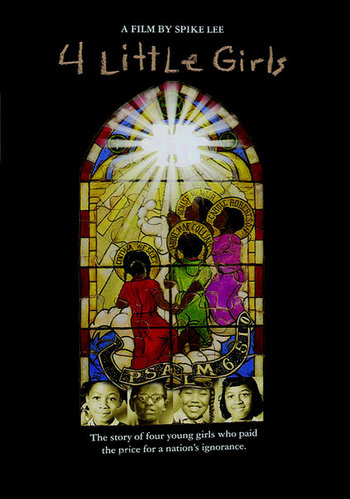 "On Birmingham Sunday a noise shook the ground
And people all over the earth turned around
For no one recalled a more cowardly sound
And the choirs kept singing of freedom"
— Joan Baez
Advertisement:

in Birmingham, Alabama, on September 15, 1963. Four white racists planted dynamite which exploded at 10:22 am, shortly before Sunday services at the church were to begin. Killed in the explosion were four young black girls: Addie Mae Collins (aged 14), Carol McNair (aged 11), Carole Robertson (aged 14), and Cynthia Wesley (aged 11). Eventually, long after the murders, one of the perpetrators is put on trial.

The tragedy ignited worldwide anger and outrage and is widely seen as being a factor in the passage of the Civil Rights Act of 1965.