The country of hot blondes, disgusting fish and majestic møøse.

OK, that's not totally true. Only half the population is actually blond, though most have the usually associated blue eyes. Moose, on the other hand...

Swedish-made cars in other countries often have their lights on all the time. This is mandated by Swedish law, due to the country's latitude.

Sweden (Swedish: Sverige), officially known as the Kingdom of Sweden (Swedish: Konungariket Sverige), is a Northern European country, by far the most populous Nordic country with more than 10 million people, and a democratic monarchy, with King Carl XVI Gustaf holding the ceremonial crown and about eight different political parties in parliament, depending on popular vote. The monarch is required to be a Protestant (Lutheran). The country also has equal rights for both sexes when it comes to inheriting the throne, having a woman, Crown Princess Victoria as heir apparent.note In fact, Victoria herself has a female heir apparent in her daughter Princess Estelle. For much of the 20th century, Swedish politics has been dominated by the centre-left Social Democrats, though their influence has waned in recent years. Tage Erlander, the Prime Minister from 1946 to 1969, holds the record for being the longest-serving leader of a democracy. Sweden is also notable as being the first country to completely outlaw corporal punishment of children, with parental rights being removed in 1966, and explicitly banning corporal punishment in the schools and homes in 1979, with an amendment to the Parenthood and Guardianship Code, reading: "Children are entitled to care, security and a good upbringing. Children are to be treated with respect for their person and individuality and may not be subjected to corporal punishment or any other humiliating treatment."

Was one of the first countries in the world to have a telegraphy line, with a line entering use in 1796. This, however, led to Sweden being reluctant to adopt electrical telegraphy, which explains why Sweden's (and the world's) last commercial semaphore line ceased operation in 1880, some forty years after the electrical telegraph had entered commercial use. A few decades later, Sweden became an early adopter of telephones, much thanks to an industrialist named Lars Magnus Ericsson, with Johan Ullman's prototypes leading to the development of Bluetooth wireless headset technology.

A 1973 bank robbery in Stockholm, later cinematized as Norrmalmstorg, was the Trope Namer for the Stockholm Syndrome.

0 to 60 in under a second, missiles to deal with air rage—the Swedish military

Sweden, having had to deal with a possible threat from Nazi Germany and later the Warsaw Pact, used to have a pretty advanced military, because it remains militarily neutral (the idea being that military neutrality is only credible if your military does not rely on one side or the other for vital equipment). Sweden had a form of conscription, but as fewer people were conscripted the last decade, and only volunteers could go abroad, it was scrapped in 2010 and brought back again in 2017. Sweden tends to get involved in peacekeeping a lot.

Sweden's main rifle is the AK-5, a more rugged version of the FNC.

Sweden's best known military company was also a car company- Saab- although the car arm went to GM years ago and has since disappeared. Saab is best known for its fighter aircraft, but does other stuff too. The most recent of these is the JAS 39 Gripen ("Gryphon"/"Griffin"), first known for crashing twice at public exhibition flights, later as one of the world's best new fighters that is not the F-22, it's in service with six countries and others have it on order or are looking at it. It can land on public roads, and is known for being the most fuel-efficient modern fighter jet (this being relative; all jets guzzle lots of fuel).

Eskimos: False. The closest one can find is the Sami people, who have been described as the European counterpart to the Native Americans (though they don't look all that different from other Europeans; they're related to the Finns).

Throughout history, educated Swedes have tended to be very good at the language of the dominant Western power (such as Latin during the Middle Ages, French from the 16th century, German from the 19th century, English from the middle of the 20th century on). There are some weak spots however, like voiced versus voiceless consonants, the distinctions being all but absent in Swedish. Swedish speakers tend to use voiceless consonants, but usually spell the words correctly* in the spelling of Swedish names, "v" / "w" and "s" / "z" can often be used interchangably; "Villy" / "Willy", "Hansson" / "Hanzon" are considered the same names and are pronounced the same way.

Sweden has produced a lot of famous actors, several of whom have done Fake Russian at some point in the career (i.e. Lena Olin in Alias- the Derevko sisters are played by a Swede, an Italian (whose mother was Swedish, too) and a Brazilian). Greta Garbo and Ingrid Bergman are the most famous. Sweden was also home to the celebrated stage and film director Ingmar Bergman (no relation to Ingrid). As a rule, the most famous Swedes tend to become Monegasque (citizens of Monaco) for purposes of tax evasion.

Sweden in fiction and media 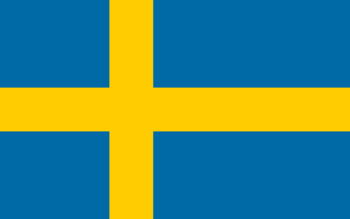 Like all other Nordic flags, this one takes after the design of the Danish flag, the Dannebrog (cross with one axis aligned to the hoist). Its blue field and gold cross alludes to the national coat-of-arms, which shows three golden crowns on a blue shield.
Coat of arms of Sweden 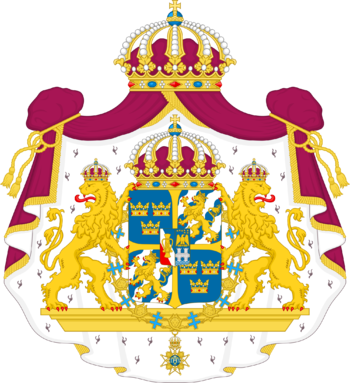