Music / Ace of Base 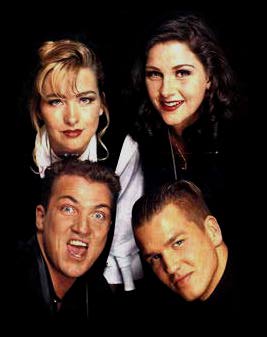 Ace Of Base is a Gothenburg-based Europop band with its heyday in The '90s and arguably one of the most prominent Swedish pop music exports right after the likes of ABBA and Roxette.

The greatest merit of Ace of Base was their début Album Happy Nation (called The Sign in certain other markets) that found its way into Guiness World Records in 1995 as the best-ever sold début studio album with, until then, 21 million sold copies (which have become 24 in the meantime). note This record has been beaten twice in the meantime; the début album of Guns N' Roses from 1987 (six years before Happy Nation) proved to show higher longevity in sales and subsequently overtook the Swedes, while both were eventually overshadowed by the début album of Linkin Park from 2000 onwards.

Their subsequent albums The Bridge and Flowers failed to repeat the success of Happy Nation, but were still a commercial success with 7 and 2 million sales respectively. Da Capo was the last album of the traditional line up and only sold about 500,000 copies. The wane of success coincided with the gradual self-disengagement of the perceived face of the band, Malin, leading to her eventual exit in 2007 and the subsequent exit of Jenny in 2009. With only Jonas and Ulf left, they watched for two new female vocalists and eventually found them in Clara Hagman and Julia Williamson who were lost in the meantime after one album (Golden Ratio) and made the band a lone pack of two wolves once again. Ever since, Ace Of Base released a compilation album fittingly called Hidden Gems containing previously unreleased material from every era of the original line-up.

Ace Of Base provides examples of: