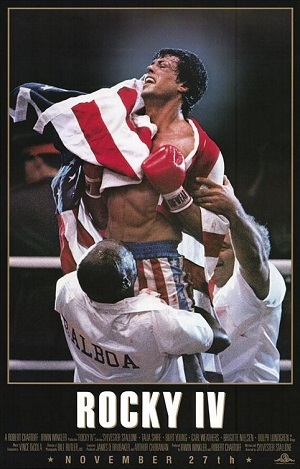 What is Duke doing?!
"I must break you."
— Ivan Drago
Advertisement:

The one where Rocky wins the Cold War.

Rocky IV is a 1985 American sports film written and directed by Sylvester Stallone, who also starred in the film. The film co-stars Dolph Lundgren and it's the fourth entry in the Rocky film series.

Rocky is pitted against Russian super-athlete Ivan Drago in a heavily Cold War themed film, which mostly revolves around the two fights with Drago. In the first, the once-again retired Rocky coaches Apollo for an exhibition match with Drago that leads to Drago killing Apollo in the ring. In the second, Rocky uses good ol' fashioned patriotism to beat down the cold-hearted Russian as an act of revenge.

Preceded by Rocky III. The film's success led to a fifth entry, Rocky V, released in 1990. Stallone later made a Director's Cut of the film, titled Rocky IV: Rocky vs. Drago, was released in theaters on November 11, 2021 and on digital platforms the next day.

Despite going eleven rounds with Rocky, Drago can still neck lift an idiot stupid enough to piss him off.

Despite going eleven rounds with Rocky, Drago can still neck lift an idiot stupid enough to piss him off.