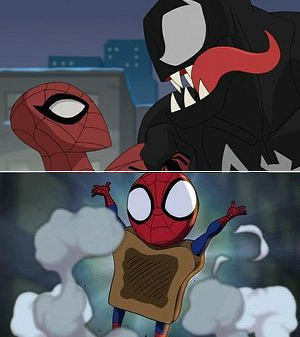 In The Spectacular Spider-Man, he's toast.
In Ultimate Spider-Man, he's... toast.
Mr. Howell now has the power to fly
The role of Mary Ann is now being played by Kareem Abdul-Jabar
Ginger is 500 feet high
She is made entirely out of zinc
I don't remember her being that way in the first season
— Radio Free Vestibule, "Something's Wrong with Gilligan's Island"
Advertisement:

The Tone Shift a show goes through when its plots become increasingly exaggerated and cartoonish. Most often happens with shows whose initial premise is mundane, and ostensibly could take place in the real world, begin to gradually take in tropes from more elaborate genre fiction until the show is at a point where it no longer resembles its pilot episode at all. This is similar to Cerebus Syndrome, except that instead of working on tone this trope increases the density and zaniness of literal plot elements, often requiring a greater Willing Suspension of Disbelief and viewer concentration level in order to succeed.

This trope is typically used as a ratings grab. For a show that's losing appeal, it's much easier to instantly come up with wacky plot elements than it is to invest time in more complex character nuance. As with much Executive Meddling, this motivation doesn't exactly have much basis in reality — most long-running shows either don't undergo this process at all, or do so only when they're about to be canceled. Oftentimes, fans appreciate good consistency in tone. It must be added that it's very much distinct from Lighter and Softer since it's zany comedy that becomes the dominant trait rather than dropping a dark angle altogether. In fact, at times it can even overlap with Darker and Edgier depending on the type of story. Shows up fairly often in adaptation, particularly Animated Adaptations, as this is an easy way to demonstrate how a show is different from its parent program.

If the author takes advantage of established series elements that have gathered over time, then it's Continuity Creep.

Often a reason for Jumping the Shark, or, in some cases, Growing the Beard.