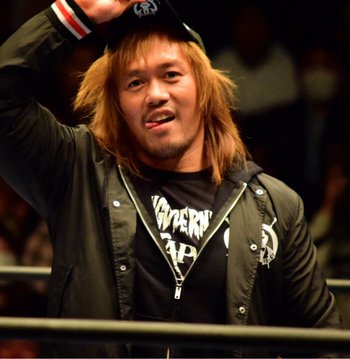 Naito began training for a professional wrestling career in 2000, initially training under Animal Hamaguchi. In 2004 he won the "Takeda Dojo Submission" tournament, which landed him a contract with New Japan Pro Wrestling to train in their NJPW Dojo.

He joined NJPW officially in 2005, getting valuable experience and even joining the Best of Super Juniors Tournament in 2007 as a replacement entry. In 2008 he would join forces with Yujiro Takahashi to form the Tag Team No Limit, which went on to be very successful, winning both the IWGP Junior Heavyweight and Heavyweight Tag championship belts. No Limit would even compete in various promotions like CMLL and Total Nonstop Action.

However in 2011 the team would disband after Takahashi walked out on Naito, kickstarting Naito's singles career. Naito would then go on to challenge in the Heavyweight division, even challenging Kazuchika Okada in championship matches, before ultimately being sidelined with a serious knee injury for eight months.

On his return in 2013, NJPW proceeded to give Naito a massive push, including a run as the NEVER Openweight Champion

, and culminating in him winning the 2013 G1 Climax by defeating Hiroshi Tanahashi in the finals and earning the right to challenge Kazuchika Okada for the belt at Wrestle Kingdom on January 4th. But something went wrong...the fans weren't excited for the confrontation at all, likely due to not perceiving Naito as a worthy challenger. Many fans were much more interested in the Intercontinental Championship match between long time rivals Hiroshi Tanahashi and Shinsuke Nakamura and so NJPW left it to a vote as to which match would main event. The IC Title match won in a landslide and the Heavyweight title match was pushed to the penultimate match, where Naito would fall.

After floating around aimlessly for 2 years following that Naito would return to CMLL to join La Sombra's stable Los Ingobernables. Learning from them, he would return to NJPW with a brand new look, and disrespectful attitude and would then form Los Ingobernables de Japon with EVILnote formerly a Young Lion named Takaaki Watanabe who was on excursion to Ring of Honor, Bushi and later on, Seiya Sanada (now just Sanada), with Hiromu Takahashinote formerly a Young Lion best known for his time as Kamaitachi in CMLL and Shingo Takaginote formerly a longtime Dragon Gate mainstay who was also the first graduate of its dojo joining down the line.

While he would become the second biggest Jerkass NJPW had to offer, the fans took to him, and his act became hot. This led to Naito winning the 2016 New Japan Cup, and then finally winning the IWGP Heavyweight Championship

from Arch-Enemy Kazuchika Okada. While he would eventually lose the title back to Okada, he rebounded with an excellent showing in the 2016 G1 Climax (barely missing the final after a five-star match with Kenny Omega went Omega's way), and then defeated Michael Elgin for the IWGP Intercontinental Championship

at Destruction in Kobe in September. In 2017 he would not only win the G1 Climax, he would beat Omega to do it.

As of January 5, 2020 he has become the first ever person to hold both the IWGP Heavyweight and Intercontinental Championships at the same time.

He is now one of the most over acts in the company and the only question left is... what's next for Naito and Los Ingobernables de Japon? If you'd ask him, he'd just say...Tranquilo.