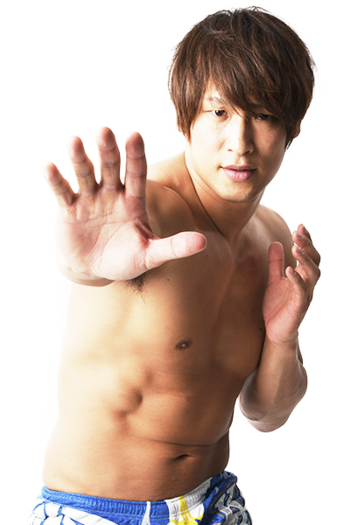 Ibushi's career has been intertwined with that of Kenny Omega since their days in DDT; Kenny originally came to Japan in 2008 to challenge Ibushi, but eventually became friends with him, forming the "Golden☆Lovers" tag team. They would win the KO-D Tag Team Championship

in 2010. They would also battle over the KO-D Openweight Championship

at Budokan Hall in August 2012, in a match many commentators call one of the greatest of all time.note In one memorable spot, Ibushi executed a moonsault off of a second-story balcony during the match, despite being forbidden to do so. That earned him a ban from Budokan Hall until 2018, when NJPW ran the last three shows of G1 Climax 28 in the building. Outside of the Golden☆Lovers' honors, in DDT, Ibushi was a three-time KO-D Openweight Champion and held the KO-D Tag Team Championship three other times (five in total).

In NJPW, he became a three-time IWGP Junior Heavyweight Champion

, and won the 2011 Best of the Super Juniors tournament. Ibushi moved to heavyweight status in late 2014, and he and Omega split up when Kenny joined NJPW, as part of the Bullet Club, in October 2014 as a junior heavyweight. Ibushi won the 2015 New Japan Cup, and earned a shot at the IWGP Heavyweight Championship

at Invasion Attack 2015, which was held by the Bullet Club's AJ Styles at the time. During the climax of the match, a distraction from Kenny would cost Ibushi the title.

Starting in 2016, Ibushi would work as a freelancer, which gave him the chance to participate in the WWE Cruiserweight Classic, making the semi-finalsnote he was offered an NXT contract, but declined to sign on. He returned to NJPW in late 2016, first under the guise of Tiger Mask W, then under his own name in June 2017 when he entered the 2017 G1 Climax.

The story between Ibushi and Omega started heating up again then; Kenny (now a heavyweight and the leader of Bullet Club) and Kota were in separate blocks, teasing a possible final match between the two, and Ibushi tried to meet and console Kenny backstage after his finals loss against Tetsuya Naito. Ibushi was then targeted by Cody, despite Omega's directive to leave Ibushi alone. Ibushi would win their match at Wrestle Kingdom 12 in January 2018, but Cody would attempt to take him out the next night at New Years Dash, leading Omega to come in the ring and make the save. Then, later in the month at New Beginning in Sapporo, Cody turned on Omega after Kenny lost his IWGP United States title match, and this time Ibushi made the save. Then, in one of modern wrestling's most anticipated and emotional moments, Kota and Kenny embraced, and the Golden☆Lovers were reunited! They would make their return as a team at the ROH/NJPW Honor Rising card in February 2018.

Ibushi would fight alongside Omega and The Young Bucks (as the "Golden☆Elite") during The Elite's breakaway from Bullet Club, and support Kenny during his IWGP Heavyweight title reign. 2018 also saw him make it to the finals of the 2018 G1 Climaxnote won the B Block with a victory over Omega, but fell to Hiroshi Tanahashi in the final, and later claim his first NEVER Openweight Championship

, although he dropped the belt shortly afterwards to Will Ospreay at Wrestle Kingdom 13.

When the Elite left NJPW in early 2019 to form All Elite Wrestling, Ibushi chose to stay in NJPW, finally overcoming his reluctance to commit to the Lion Marknote his deal in 2013 was a dual-status contract with both NJPW and DDT, making him the first wrestler to have two home promotions; he was sidelined in late 2015 with a cervical disc herniation, and when he came back from that in 2016, resigned from both companies to remain freelance to sign exclusively with them. He would claim the IWGP Intercontinental Championship

on 04 April, defeating Naito in Madison Square Garden, but would drop it back to Naito a couple of months later.

On August 12, 2019, Ibushi won the 2019 G1 Climax tournament by beating “Switchblade” Jay White in the final. In doing so he became the first and currently only wrestler to have won all three of New Japan’s singles tournaments (Best of Super Juniors, New Japan Cup, G1). However, he was unable to follow up with a win at Wrestle Kingdom 14 in 2020, losing to Kazuchika Okada on the first night, and then Jay White on night two.

While he did have championship success in early 2020, winning the IWGP Heavyweight Tag Team Championship

alongside Hiroshi Tanahashi, he would eventually set his sights on winning the IWGP Heavyweight and IWGP Intercontinental titlesnote which have been defended together since WK 14 and "becoming God"note he noted at one point, not "a god", but "God". On October 18, 2020, he won the 2020 G1 Climax, making him the third person after Masahiro Chono and Hiroyoshi Tenzan to win it back to back. Although he dropped the G1 briefcase to Jay White the following month, Naito still insisted on putting his titles on the line against Ibushi on night one of Wrestle Kingdom 15, with the winner defending both belts against White on the second night.

On January 4th, 2021, Ibushi finally achieved his goal, defeating Naito for the titles in a hard-fought match and finally earning his longtime rival's respect. He successfully defended the titles the following night against Jay White, overcoming an unfavorable head-to-head record and the typical Bullet Club antics. Once in possession of both the "greatest" titlenote Intercontinental and the "strongest" titlenote Heavyweight, he eventually convinced NJPW to unify the belts after the annual Anniversary show on March 4th, 2021, becoming recognized as the first IWGP World Heavyweight Champion