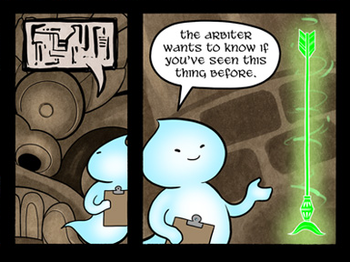 One character has a peculiar way of speaking that may be hard for other characters (and the audience) to understand.
Advertisement:

The most obvious case is when the two main characters speak different languages, and have a Language Barrier. It can be a nice Bilingual Bonus for those in the audience that know both, but we'll need a third character who knows both languages to have some communication going on. There are many other reasons this could be: Maybe the Intellectual Animal can only say their own name, or mumbles everything they say. Maybe The Smart Guy plunges into Technobabble and Sesquipedalian Loquaciousness when they get excited. Maybe the Cloudcuckoolander is just too crazy for the average person to understand. There's also a good chance you've been thrown into a Cryptic Conversation.

No matter why they're hard to understand, this would ordinarily limit their ability to function both in-universe and as a character. Thankfully, however, this character has a friend who will interpret what he's saying. This friend is the Translator Buddy.

This is a common way to show that two characters are close friends, as only the "interpreter" understands his friend so well. Whether they're distilling ten minutes of technobabble to two sentences in Layman's Terms, explaining what all those beeps and whistles the robot is making mean, or playing charades with their squirrel Animal Companion to get the scoop on the enemy's campsite, they can generally be counted on to clue to the rest of us in on what their buddy is trying to say. Hilarity and drama frequently ensue when even the Translator Buddy is stumped. The translator may also come with the guy that speaks the common language, explaining the foreigners to him. They can either be full-fleshed characters or just a Living Prop, standing there to translate during a certain scene and then forgotten.

A frequent lampshade is to have the person being interpreted respond with a befuddled "That's what I just said: {brief recap of technobabble explanation/phrase in an incoherently thick accent/Poirot Speak gag}"

This is one of the responsibilities of a Cloudcuckoolander's Minder. Compare Mouth of Sauron, Voice for the Voiceless and Repeating So the Audience Can Hear.

The Shy Guy translates what the Big Lava Bubble says.

The Shy Guy translates what the Big Lava Bubble says.