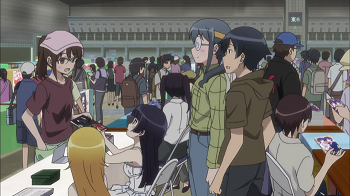 Fan conventions: Where the line between reality and fiction becomes blurry. And very long.
Rupert: Hobbits will be mustering under Gandalf as usual in the Ops Room. Esoterica with the Master Mage is in a dimension yet to be fixed...Filking will be in Home Universe this year...Stan, who are these people?
Stan: Ordinary people having fun, I expect.
— Deep Secret by Diana Wynne Jones
Advertisement:

Or just Convention or Con. This is where fans of a particular franchise, creator or work all meet together, discuss it and ask questions to the stars. A number turn up in costume.

Frequently parodied in the case of a Show Within a Show. The fans will often be portrayed as being geeky immature Man Children who are so obsessed with a certain franchise that they seem to be out of touch with reality. Usually they will be seen gawking over rare valuable collector items that they buy to make them part of their unhealthy large collection of junk. They crowd together at Q&A panels to see their favorite stars and ask them the most in(s)ane questions, usually about continuity errors or scenes in the franchise that destroyed their Suspension of Disbelief. Also common is fans rejoicing because the stars said or shouted a meme or a catchphrase, especially if they requested it themselves.

Most of the time the unique experience of having several creators or cast members together in one place will be wasted because the fans keep asking questions in which they shoehorn every possible meme, running gag, catchphrase or pop culture reference they can think of and want to show off their extensive knowledge of every issue, record, episode, game and/or film in the franchise. Some Loony Fans take pride in announcing themselves to be "the stars' biggest fan." A crazy fan theory will be uttered to which the stars answer: "No that's not true", leaving the fan disappointed because he believed in it so much. Hardly any questions about the stars' creative process will be asked. Most of the time it just involves In-Universe questions, as if the franchise is a collection of true, historic events. Many audience members have a tendency to make remarks that show off their own lack of imagination, for instance: "Where do you guys get all your ideas?" or "If that character from that franchise fought that particular character from this franchise: who would win?". Also expect one star to get infuriated with some of the fans and tell them to get a life!

, a biannual doujinshi fair in Tokyo which is easily the largest fan convention in the world. In North America, the annual San Diego Comic-Con is the largest and most famous convention (like many American comic conventions, it has evolved to cover "nerdy" entertainment in general at this point), particularly from The New '10s onward.

Truth in Television, unfortunately and sometimes even This Loser Is You. Contrast and compare trade shows for the entertainment industries like the Electronic Entertainment Expo.