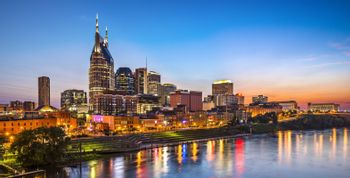 Music City USA
Nashville is the capital of the state of Tennessee and is the largest city and largest metropolitan area in that state. It is known for being the center of the Country Music industry, including being the home of the Grand Ole Opry (now run out of Opryland instead of the Ryman Auditorium). The largest hospital corporation in the world, the Hospital Corporation of America, is based out of Nashville, and Nissan North America is based in Franklin, a suburb of Nashville.
Advertisement:

Nashville is also a publishing center, specifically for religious texts and church sheet music (Thomas Nelson is the largest producer of Bibles in the world), leading the city to hold the name "the Buckle of the Bible Belt." Additionally, Nashville has over 700 churches, the most of any city, and is the headquarters for the National Baptist Convention, the National Association of Free Will Baptists, and the Gideons International. Finally, thanks to its existing music and religious publishing infrastructure, Nashville is also the main center of the contemporary Christian music industry.

Despite the strength of the Nashville religious community and its location in the south, Nashville itself is a left-leaning city, with a history of liberal voting patterns, in part because of the city's strong urban black population and large number of educational institutions.

Nashville is also referred to as the "Athens of the South" because of its numerous academic institutions, the most prominent of which (and Nashville's largest employer) is Vanderbilt University, founded by Cornelius Vanderbilt. Additionally, Fisk University, a historically black college, is located in Nashville—as are the Fisk Jubilee Singers, one of the nation's most prominent Gospel groups. In a nod to the title of "Athens of the South," Nashville constructed a full-scale copy of the Parthenon, the only one in existence, which sits in Centennial Park.

Nashville's most famous industry, however, is its country music industry, primarily located around Music Row. While Nashville's music scene started with Gospel and Church music (the Fisk Jubilee Singers were one of the first major music groups to come out of Nashville and Queen Victoria said that they "must have come from a musical city."), but with the creation of the Grand Ole Opry (played on WSM-AM, a radio station that can, at night, be heard across North America), Nashville became the center of the growing music industry. Multiple major record labels, including Capitol Records, are based in Nashville.

Despite the ongoing strength of the country music industry, Nashville has also developed a strong punk scene and a strong rap scene, the last of which gave the city the name "Cashville." Nashville also played host to the making of PBS's "TV Worth Watching" campaign in the mid-'80s, with the original version, written by Craig Deitschmann and Timmy Tappan, sung by Los Angeles-based singer-songwriter duo Billy Davis and Marilyn McCoo and produced by Soundshop Productions.