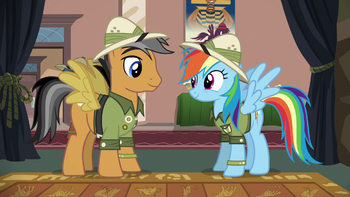 A hopeless nerd who obsessively memorizes every last detail of the Daring Do books... and Quibble Pants.
Rainbow Dash: Daring Do told me that Caballeron came to this convention to steal the Amulet of Culiacan, and I just saw him and his henchponies come this way!
Quibble Pants: Okay. I'm gonna head back inside. There's just a little too much crazy out here for the both of us.
Special Guest Star: Patton Oswalt as Quibble Pants
Written by Josh Haber and Michael Vogel
Advertisement:

Rainbow Dash attends a Daring Do convention, excited to see the exhibits and talk with A.K. Yearling, whom she secretly knows is Daring Do herself. While at the convention, she meets another fan named Quibble Pants, and the two instantly begin bonding over their fandom for the Daring Do books. During a lunch break, Rainbow Dash suggests doing activities from the later books in the series, but Quibble flatly refuses, saying he will only acknowledge the first three books in the series. In fact, he's attending the convention with the specific purpose of complaining to A.K. Yearling about her perceived lack of quality in the later books that focus more on pulp adventure instead of logic and puzzles from the first three books. Rainbow is incredulous at Quibble's dismissal, but can't defend the books without revealing Daring Do's secret identity. Instead, Quibble and Rainbow get into a shouting match, both walking off in a huff.

At the hotel, Rainbow Dash finds A.K. Yearling, who pulls Rainbow into her hotel room. Daring Do knows that one of her enemies, Dr. Caballeron, is also at the convention, looking for her to steal a key to obtain a treasure called the Seven-Sided Chest. While Rainbow complains about Quibble's bad attitude, Daring Do brushes her off, saying she has other things to worry about. Rainbow vows to keep an eye out for Caballeron, running into Quibble on the convention floor again as she does. Caballeron sneaks out into a back alley, prompting Rainbow to follow him. Quibble thinks Rainbow is just trying to mock him as he also heads into the alley, where the two of them are suddenly kidnapped by Caballeron's henchponies. The two of them are taken to the jungle, where Caballeron explains his plan to trade their lives for the key to the temple with the Seven-Sided Chest. Quibble thinks the entire thing is an "adventu-cation", a trip that simulates a Daring Do experience, and constantly mocks and belittles the ponies he thinks are actors. Angry, Caballeron ties them up in chains and leaves to go find the Temple of Chicomoztoc. Quibble, with his knowledge of puzzle-solving, easily breaks the lock. Still thinking it's all fake, Quibble insists Rainbow lead him back to the hotel. Rainbow plays along just to get him to come with her as they trek through the jungle.

Rainbow Dash and Quibble Pants come across a bridge, with Quibble complaining how "stereotypical" the adventure is before the bridge begins to break. He falls towards a river below, but Rainbow saves him, landing them safely nearby. However, their fall has led Caballeron to the temple, dragging the two of them in as hostages once again. Inside, Quibble angrily accuses Caballeron over the "lack of safety", accidentally pressing some switches on the floor. This releases a giant sand crocodile called a Cipactli on everypony, at which point Quibble is finally convinced that the adventure is real. Daring Do rescues them from the beast, but the sand is still rising, the Cipactli drawing ever closer. Daring Do takes the key towards a room with seven doors, Quibble quickly figuring out the solution and pointing out the door that leads to the Seven-Sided Chest. Daring Do stores the treasure away, with the rising sand getting close. Thinking quickly, Quibble has the two pegasi pull him along on a vine over the top of the sand, escaping the Cipactli and the temple safely.

After Daring Do disposes of Caballeron and his henchponies by getting the Cipactli to chase them instead, she flies off to store the chest in a museum and points Rainbow Dash and Quibble Pants back to safety. Quibble admits he was wrong about the newer books, but he still doesn't like them. Before Rainbow can protest, he explains that they can both enjoy the books their own way — Quibble for their puzzles and critical thinking, and Rainbow Dash for their action and set pieces — and still remain friends. They head back for the convention, with Quibble still insisting he could write the next Daring Do book better.

Cue... Quibble rambling over the credits.

According to commentary, Patton Oswalt ended up going off on a tangeant during the final segment of the episode and it felt too much in-character that the editors decided to leave it in and have it play over the credits.

Example of:
Throw It In

According to commentary, Patton Oswalt ended up going off on a tangeant during the final segment of the episode and it felt too much in-character that the editors decided to leave it in and have it play over the credits.