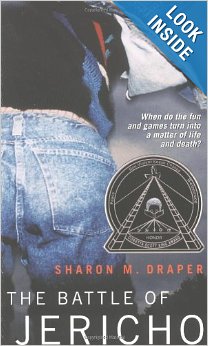 The Jericho Trilogy is a three-book children's (somehow) series written by Sharon M. Draper published from 2005 to 2010.

The first book of the series, The Battle of Jericho, revolves around a group of boys (and the daring girl Dana) who become part of an exclusive high school club called The Warriors of Distinction, with plenty of attention, hot girls, and the famous black jacket...however, when they actually begin the initation ceremony, they find that the club has dark, hidden rituals.

The second book in the series, November Blues, features a main female character November who was dating Josh in the first book, now suddenly pregnant with his child after Josh's tragic death. Josh's parents find out and want to take care of the baby for themselves, and with the pressure of her senior year and a soon-to-be mother November finds herself in a situation she can't shop her way out of.

The third and final book in the series, Just Another Hero, revolves around the group of characters going through their senior year dealing with their own personal issues, until a fire alarm is pulled in class as students are held hostage with an assault rifle by a deranged classmate.