Recap / My Little Pony: Friendship Is Magic S6 E15 "The Cart Before the Ponies" 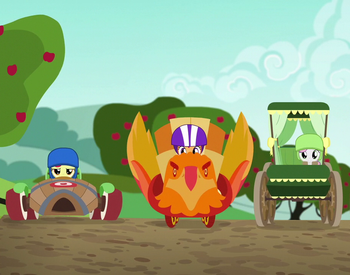 The second race is about to begin—but it'll be a breeze compared to the first one.
"I'm sure our older sisters know what they're doin'. Right?"
— Apple Bloom
Story by Ed Valentine and Michael Vogel
Written by Ed Valentine
Advertisement:

Cheerilee's students are excited to participate in the Applewood Derby, a cart race that has been a regular event in Ponyville for years. Prizes are awarded in three categories — Fastest, Most Traditional, and Most Creative — but only carts that finish the race are eligible to win. One older pony can help each filly or colt build the cart, then has to ride in it with him/her during the race. The Cutie Mark Crusaders decide to enter in categories outside their comfort zones (Fastest for Apple Bloom, Most Creative for Scootaloo, Most Traditional for Sweetie Belle) and recruit their older sisters to help.

However, each of the older mares soon takes over the entire project for her team. Applejack builds an old-style cart for Most Traditional, determined to uphold the Apple family's ways. Rainbow Dash designs one to win the race and capture Fastest, remembering the fun she had as a cart racer in Cloudsdale when she was a filly. Rarity goes for Most Creative, as a way of making up for her second-place finish in that category (to Derpy!) when she competed in her youth. Every time the Crusaders try to change the cart designs, their sisters override them. Their resentment steadily grows until race time, when they all find they have been demoted from driver to passenger in their own carts.

As the race gets underway, Applejack's traditional cart is so slow that it lags far behind everypony else, the flapping wings on Rarity's swan-shaped cart keep blocking other racers, and one of the wheels falls off Rainbow's streamlined cart to send it sliding out of control. The three teams collide in the very middle of the track, causing a pileup that destroys all the carts. Finally fed up, the Crusaders lash out at their sisters for commandeering the jobs of building and driving the carts and ruining the Derby. Both sides realize their mistakes — the Crusaders for not standing up for their own ideas, the mares for not listening to them.

On a suggestion from Rainbow Dash, the mares help the Crusaders rebuild their carts in the styles they had originally intended, and the Derby is re-run with all the older ponies watching from the sidelines. With nothing more to do, Applejack, Rainbow Dash, and Rarity relax at trackside and wonder why they got so caught up in winning in the first place.