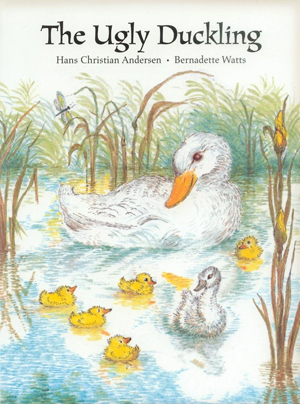 There once was an ugly duckling...
Advertisement:

A swan egg winds up in a duck nest. When it hatches, it is clear that this baby "duck" is different from all his siblings and gets teased and picked on. The "ugly duckling" goes off on his own and ekes out a miserable existence, meeting misfortune everywhere he goes.

When the spring comes, he sees a bevy of swans on a pond and is drawn to their beauty, feeling compelled to approach them even though he fears they will abuse or even kill him for his ugliness. To his amazement, they receive him as one of their own. The "duckling" catches sight of his own reflection and sees that he too is a swan.

Adaptations include a famous Disney cartoon from 1939, and a 1997 animated movie based on The Ugly Duckling but with its own original plot. A long running animated series was also made, but it is essentially Lost Media at this point.

"The Ugly Duckling" includes examples of: