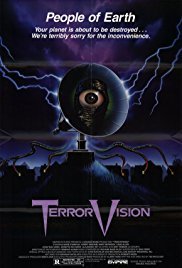 "The Do-It-Yourself 100 picks up things from EVERYWHERE!"

An alien civilization has decided to send its garbage into space as energy so it doesn't clog up their planet. On Earth a family have just set up a fancy satellite dish. These two events clash when the trash energy is given material form through the telly. Naturally this trash includes a monster which begins gobbling up anybody it can get ahold of.