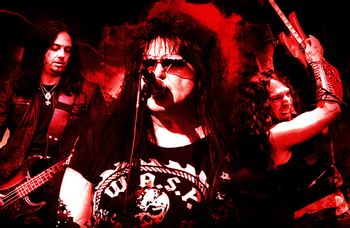 The current line up (from left to right): Mike Duda, Blackie Lawless and Doug Blair
"We ain't sure, pal."
— Blackie Lawless, when questioned about the meaning of band's name.
Advertisement:

W.A.S.P. is a Heavy Metal band from USA. Initially formed from the ashes of Sister, Circus Circus and London, W.A.S.P. gained notoriety for their shock rock antics (throwing raw meat to the audience, naked models tied to torture racks etc.) and the feud with PMRC in the 80's over their "objectionable" lyrics. Despite its attempts to ban the band, the outrage only resulted in higher album sales. The band took a more serious turn lyrically and sonically in the 90's with The Crimson Idol and, with the exception of Helldorado, has continued to this day. The frontman, Blackie Lawless, is the only member of the band from the original albums, very much a case of I Am the Band.