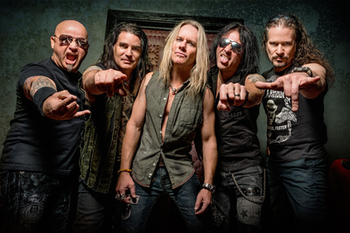 Establishing themselves as the number three band in the Hollywood rock scene behind Guns N' Roses and Poison, the band had their breakout hits with the multi-platinum album Dirty Rotten Filthy Stinking Rich and the single "Heaven", which got to number two in the American charts (although it peaked behind Milli Vanilli, which is more or less the same as being the number one song) and reached their peak success with Cherry Pie and the eponymous hit single, an arena rock anthem that soon became their Signature Song.

However, changing trends in rock music served to undermine the band's career. Like a lot of hair bands, Warrant were displaced by the rise of Grunge, and after one last hit (the album Dog Eat Dog) their popularity declined. Since then, they've continued to perform and record either with or without bandleader Jani Lane, who died of alcohol poisoning in 2011.