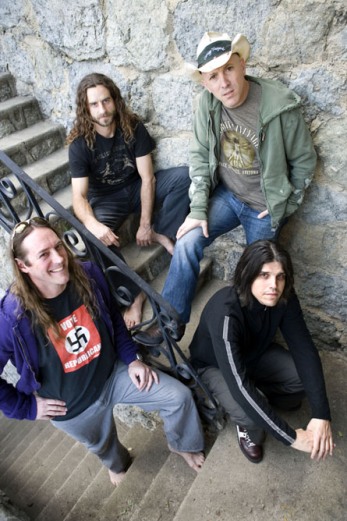 Founded in Los Angeles in 1990, Tool is an enigmatic Progressive Rock/Metal group mostly known for their use of unconventional time signatures and rhythms, long songs, Mind Screw-tastic imagery, and emphasis on personal interpretation of their music.

Like many bands in the 90s music scene, Tool started out as an underground group, and was signed by a record company after only three months of playing together. On March 1992, their first EP Opiate was released. Since then, five studio albums have been released, all of which have gone platinum and achieved widespread success worldwide.

Tool incorporates many different styles and influences in their music, but the one theme they keep constant is the importance of personal interpretation of their songs (to quote one of their own lyrics: "try and read between the lines"), making them possibly the only band that runs solely on The Walrus Was Paul. To emphasize this even more, they have only released official lyrics with one of their albums, Fear Inoculum, so that what the lyrics actually mean (or even are) never gets in the way of what the listener thinks they mean.

A few factors remain constant throughout their work, however. They love using weird time signatures that shift throughout the song; one track ("Lateralus") even has the rhythm and syllables of the lyrics arranged in a Fibonacci sequence (1, 1, 2, 3, 5, 8, 13). The members of the group have unique styles, and Maynard James Keenan's vocals are instantly recognizable, not only for his voice but for his skill with the Metal Scream. Danny Carey is also one of the most acclaimed contemporary drummers going, and Adam Jones's guitar tone on Opiate, Undertow and Lateralus is just as iconic as Keenan's vocals. Not to mention Justin Chancellor's strong bass lines (and on Opiate and Undertow, Paul D'Amour), which often make a Tool song instantly recognizable.

Another important part of the band's music is the inclusion of collaborated works of art and music videos that echo themes presented in their songs and albums. These pieces of art usually involve disturbing (if not straight-up horrifying) imagery, play with the Uncanny Valley, and aren't necessarily supposed to tell an actual story but rather evoke certain feelings from the viewer. They definitely succeed.

Over the band's career, they've addressed many diverse topics such as religion, the music industry and media censorship, child abuse, drug use, transcendence, and even Fan Dumb from their own fans who started giving them the "It's Popular, Now It Sucks!" treatment. This varied subject matter has also made Tool the subject of much controversy and censorship, including one incident with their song "Stinkfist," which was renamed and edited to run on MTV due to "offensive connotations," as well as Walmart not selling their first LP Undertow with the original cover art. Despite (or possibly because of) that controversy, they have remained a hugely successful group and continue to actively tour both in the United States and internationally.

Their latest release — their fifth studio album Fear Inoculum — was released on August 30, 2019. It is the band's first album in 13 years, failing to meet numerous and very tumultuous release dates over several years, much to the confusion and ire of their fans. It had previously been revealed that familial commitments and an ongoing lawsuit had severely delayed any work they could have done, and Adam Jones stated that any new music of theirs wouldn't be released unless they were satisfied with the final product. A little while earlier on August 2, 2019, their back catalogue was made available to streaming services.

You look so precious...