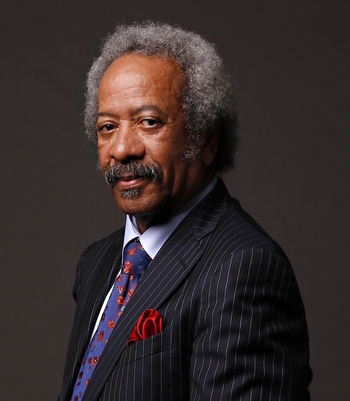 Southern nights
Have you ever felt a southern night?
Free as a breeze
Not to mention the trees
Whistling tunes that you know and love so
- "Southern Nights"
Advertisement:

Lyricist, producer, session pianist and solo artist, Allen Toussaint (January 14, 1938 – November 10, 2015) ranked among New Orleans R&B's greatest and most enduring musical ambassadors. Thanks to his work with various artists both inside and outside of the Big Easy, he became a key figure in the curation of the sound of R&B in New Orleans in the '60s and '70s.

Learning piano as a teenager, Toussaint began his professional life in the mid-50s as a keyboardist for Crescent City music chief and producer Dave Bartholomew. If Bartholomew had defined the sound of New Orleans in the '50s, then Toussaint updated and remade it for the new decade with a rolling and rollicking piano and horn-led sound. In 1958, Toussaint (under the pseudonym, "Al Tousan"), released his The Wild Sound Of New Orleans for RCA Victor, an album that helped establish his reputation and, furnished a hit for American trumpeter and bandleader, Al Hirt in the early-60s with "Java". Although the record was a relative success, Toussaint really began making his mark on the scene after becoming A&R man for the Minit label at the dawn of the '60s, in which with his ability as a writer, producer, arranger and musician, he would be the man behind a string of hits including Chris Kenner's "I Like It Like That", Jessie Hill's "Ooh Poo Pah Doo", Irma Thomas' "Ruler Of My Heart" and Barbara George's "I Know", among several others.

The mid-60s also found him working with Lee Dorsey, whose Toussaint-penned singles for the Amy imprint ("Ride Your Pony", "Get Out Of My Life, Woman", "Working In The Coal Mine" and "Holy Cow") made him one of the era's best-loved soul artists. The late '60s, meanwhile, saw Toussaint working with New Orleans funk musicians, The Meters. Hired as the in-house rhythm section for Sansu Enterprises (the label Allen had set up with fellow New Orleans producer Marshall Sehorn), this bunch backed the likes of Dorsey and Earl King, before becoming stars in their own right. With Toussaint at the helm they made songs that would be considered classics of the New Orleans funk scene sin as "Cissy Strut", "Look Ka Py Py" and "Yeah, You're Right" among others.

As well as helping invent the sound of New Orleanian funk, Al had also re-instated his solo recording career with in the 70s eponymous album, Toussaint (sometimes known as From A Whisper To A Scream) and The Meters-backed, Life, Love And Faith for the Scepter label before leaving for Warner/Reprise in 1972. His three albums for the label included Southern Nights, which would yield a hit record for Glen Campbell with a cover of its Title Track. He would also continue songwriting for artists such as Labelle, for whom Toussaint co-wrote and produced the massive 1975 No.1 R&B classic, "Lady Marmalade", of which was one of many records he would write and produce as he would be enlisted to assist with records by Bonnie Raitt, The Band, and The Wild Tchoupitoulas (a record comprised of the performance of Mardi Gras Indian

music by the tribe of the same name, with instrumentation from the Meters and future members of the Neville Brothers band).

A further solo set, Motion (1978), would again fall largely on deaf ears and Toussaint would begin to withdraw himself from the music industry. However, he would periodically resurface on occasion producing works for the likes of Joe Cocker, Albert King and Etta James. And although he would still be present in the music scene (releasing I Love A Carnival Ball, Mr Mardi Gras Starring Allen Toussaint, appearing as the musical director for the 1987 off-Broadway production Staggerlee and, like many other soul/funk artists of his time, his compositions were were sampled by hip-hop artists), he wouldn't release another high profile record until 1996, with Connected.

However unfortunately, the most notable about his 90s-00s period was aftermath of Hurricane Katrina which would destroy his home and recording studio. Causing Toussaint had to uproot from his homeland, relocating to New York City. He would still record during this time-frame releasing Going Places with a backing band called the Jazzity Project, appearing on Solomon Burke producer, Joe Henry's soul artist assembly I Believe to My Soul and releasing a collaborative album with Elvis Costello, titled The River in Reverse all within the three years after the tragedy. In 2009 and 2013, for Nonesuch and Rounder Records respectively, Toussaint would The Bright Mississippi and Songbook, the latter recorded live at Joe’s Pub in NYC in 2009.

Sadly, Toussaint died while on tour in Madrid, Spain, on November 10, 2015. The distinguished artist was paid tribute by producer Joe Henry, who pieced together several of Toussaint’s Bright Mississippi outtakes for the posthumous American Tunes (2016).